"The more happy clients we have, the more our business will grow. I think the sky's the limit...and I'm SO glad you've joined the team!"
— Lottie, Animal Crossing: New Horizons – Happy Home Paradise

Lottie is a river otter[1] in the Animal Crossing series who made her first appearance in Animal Crossing: Happy Home Designer. She is Lyle's niece.[1] Her name likely derives from her species.

Lottie is a pink river otter with brown hair tied into a bun. She has small round eyes with three black eyelashes each, three freckles each below her eyes, a blackish-brown nose with a white oval dot, orange inner ears, and a 3-shaped smiling mouth with darkish-red inside. Without makeup, her eyes are small.

In Happy Home Designer, amiibo Festival, Welcome amiibo and Pocket Camp, like the other employees in Nook's Homes, Lottie wears a red uniform with white buttons, along with a navy skirt and a yellow necktie. She also wears an aqua/blackish-gray hair ribbon with white polka dots and aqua/black shoes.

In New Horizons and Happy Home Paradise, Lottie no longer wears her Nook's Homes employee outfit, instead wearing a Paradise Planning Muumuu, an aqua hair tie with a cream-colored flower, an aqua bracelet, and aqua sandals.

Although Lottie is absent in the original release of Animal Crossing: New Leaf, she appears in the Welcome amiibo update, showing the player how to use the bottom screen to move furniture after building the Secret Storage extension. She can also be seen after successfully connecting Happy Home Designer data to the game, invited by Isabelle, and mails the player the Nook's Homes model.

Lottie was added to Animal Crossing: New Horizons as part of the Animal Crossing: New Horizons – Happy Home Paradise paid DLC expansion. Once the player's Resident Services has been upgraded from a tent to a building, Tom Nook will call the player as soon as they leave their home, and will ask them to visit the airport, where they meet Lottie. No longer working for Tom Nook, she explains that she has founded her own company, Paradise Planning. She will then depart to her headquarters via plane.

When the player arrives at Paradise Planning, Lottie will formally introduce herself and explain her role, while also explaining the roles of her two employees; Niko, who operates a boat to take the player to the site of a job or revisit a previous client, and Wardell, who provides the furniture used for jobs and also operates the gift shop.

Lottie operates the front desk of the building, where the player can talk to her either to begin or finish working with a client. She will hold a meeting with the player and their client as the latter is describing their vision for an ideal vacation home. Upon successful completion of a job, Lottie will pay the player in Poki. The amount received is proportional to the type of job, or how closely the player followed a client's vision.

Lottie's poster can be obtained from Nook Shopping after inviting her to Photopia via her amiibo card. If summoned at The Roost, she will also bring along Niko and Wardell. She will also appear if Lyle is invited, along with Tom Nook and Digby.

Lottie is the receptionist at Nook's Homes in Animal Crossing: Happy Home Designer. She also helps train the player and talks them through the process of preparing a villager's house, before arriving at the site, like letting the player choose a site and a layout. Lottie also can help the player log onto Happy Home Network and change the settings for the network. Lottie is seen every day at her desk, typing. Talking to her normally results in suggestions to drum up business; however, rarely, she can be seen without mascara, and she talks about that instead. 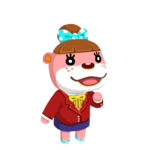 In Animal Crossing: Pocket Camp, Lottie hosts multiple garden events, these include the Gothic Rose Festival and the Wedding Expo event. Lottie is later given a larger role in this game as the host of Happy Homeroom, an area similar in design to Animal Crossing: Happy Home Designer.

Lottie's home is the first one the player designs in Animal Crossing: Happy Home Designer, and it serves as the tutorial for the mechanic. It can only be remodeled by scanning her amiibo. 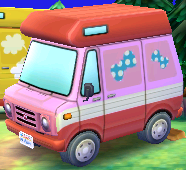 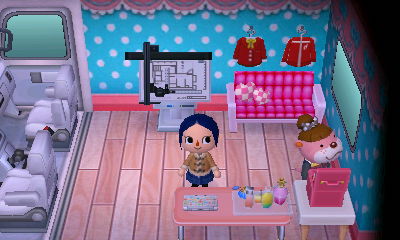 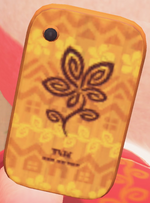 If the player chooses to design a house for Lottie, her role will be taken over by Niko. 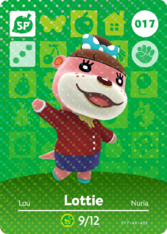 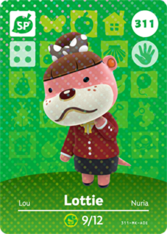 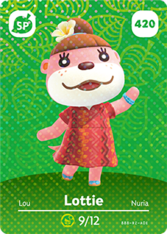 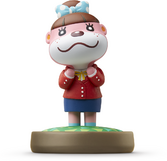 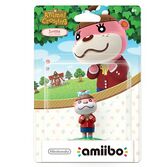