For the villager whose Japanese name is Jack, see Raymond.

"This is a night for frights and delights, which comes but once a year—that's right! Halloween is here!"
— Jack, Animal Crossing: New Horizons

Jack, the self-proclaimed Czar of Halloween, is a special character in the Animal Crossing series whose species is unknown. He is the host of Halloween, and he distributes items from the Spooky Series furniture, which can only be obtained through him prior to New Leaf. He wears a pumpkin on his head which, during Halloween, makes him appear similar to the villagers in the town, who are dressed similarly. In Pocket Camp, Jack claims that the pumpkin cannot be removed because it is his actual head. Jack, like all other holiday-related characters, is absent from Wild World along with Halloween. His name may be derived from a jack o' lantern, which is often made from a carved pumpkin.

Artwork of Jack from Doubutsu no Mori.

Jack's species is permanently unknown, because he always has an orange pumpkin head, which has a pair of round eyes, a small oval nose, a scary-smiling mouth, and a green stem. He wears a dark-purple robe, a pair of black gloves, and a pair of black shoes.

Jack is a lover of Halloween, explaining why he always hosts the event at the end of October.

Artwork of Jack from Animal Crossing.

Jack's first appears in Doubutsu no Mori and later appears in Animal Crossing and Doubutsu no Mori e+. During Halloween, Jack appears at a random spot in town, demanding candy should the player encounter him. Unlike the other villagers, who wear the same clothing as him, he will not chase the player, giving them a way to discern who is the real Jack. Upon talking to Jack, he will give the player an item from the Spooky Series in exchange for Candy. Doing this throughout the event will complete the series.

Artwork of Jack from City Folk.

Jack returns in Animal Crossing: City Folk after being absent in Animal Crossing: Wild World. He was announced on the Japanese website for City Folk, along with other characters. His role remains the same as in Animal Crossing, and he now calls himself the Czar of Halloween. He sends a letter out to players earlier in the month, warning of his arrival, and telling them to have candy ready. Nook's store starts selling candy on the 1st of October.

Artwork of Jack from New Leaf.

In Animal Crossing: New Leaf, Jack can be found walking around the player's town on October 1 to October 7 (however he will disappear the day after the player speaks to him) where he will tell them about Halloween and what will happen on that night. During this time, the player cannot work at The Roost. On Halloween, Jack can be told apart from the other villagers by his darker orange pumpkin mask and the carving on it. When given a piece of candy he will then ask the player if they want their choice of a mask or piece of furniture from the Spooky Series. He owns an RV that sells 12 Halloween-themed items for 3 MEOW Coupons each. 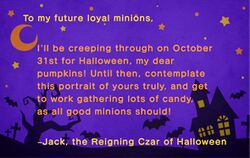 The letter sent by Jack in New Horizons.

While initially absent from Animal Crossing: New Horizons, Jack returns in the 1.5.0 Fall Update, reprising his role as host of the Halloween event. On October 1 he sends the player Jack's Portrait along with a letter informing them about Halloween. On Halloween he will give the player Jack's Face or Jack's Robe, two clothing items based on his appearance, or the Haunt Reaction if given Candy or a Lollipop. He can also give the player the DIY recipes for the Spooky Carriage and Spooky Wand if given a Lollipop.

Jack's poster can be obtained from Nook Shopping after inviting him to Photopia via his amiibo card.

Prior to its removal in version 2.0, when the player scans Jack's amiibo card and tries to invite him, he will say:

Hee hee hee! Ho ho ho! It is I, Jack the reigning czar of Halloween.
You were one of my minions, weren't you? As I, your name was Player? What's this now? a campsite? Well, I suppose it all depends on how well stocked your candy dish is...
Ah, but what am I saying? I'm far too busy to go camping!
I'll haunt your island on Halloween, and not a moment before, pumpkin!

Jack appears in Animal Crossing: Happy Home Designer when his amiibo card is scanned into the game via the amiibo phone, and will ask the player to build a house for him. Like all special characters, he leaves the theme up to the player, and does not request for certain furniture to definitely be in his house.

Artwork of Jack from Pocket Camp.

In Animal Crossing: Pocket Camp, Jack appears to celebrate the Halloween Gardening Event, similar to all other gardening events. Here, he will ask for the player to plant Pumpkins to attract bats, providing furniture once a certain amount is caught. Additionally, Jack also hosts the Halloween Fishing Tourney, replacing the usual Chip.

Jack appears as a trophy in Super Smash Bros. for Nintendo 3DS. 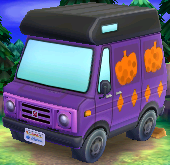 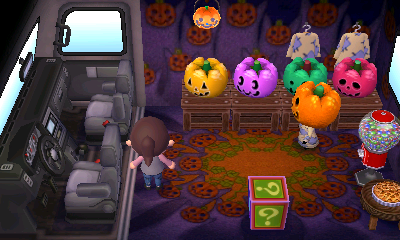 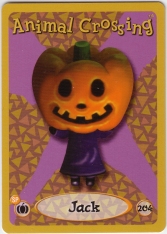 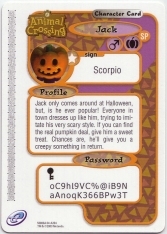 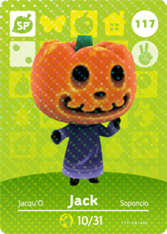