This article is about the alter ego of K.K. Slider. For the K.K. Slider song, see DJ K.K..

DJ KK is an alter ego of K.K. Slider that first appears in Animal Crossing: New Leaf. Unlike the regular K.K., DJ KK routinely plays on a turntable instead of playing with a guitar.

DJ KK is identical in appearance to K.K. Slider, as a white-furred dog with thick black eyebrows. However, he now wears a different outfit with black thick-rimmed glasses and an orange beanie. In Pocket Camp, DJ KK wears a black shirt with "KK" written on it.

In contrast to his more mellow personality as K.K. Slider, DJ KK is displayed as outgoing and active, becoming a so-called "life of the party." He can be seen jumping and even dancing as he plays music on his turntable. While they are indicated to be the same individual, DJ KK often acts as if he is a different person, and leaves the question up in the air when asked; this may indicate that he takes the persona to avoid recognition.

In Animal Crossing: New Leaf, DJ KK performs remixed tunes of his tracks for the player to listen to in Club LOL every day (except Saturday where the regular K.K. performs) from 8 PM to 6 AM. Every night alternates between House Night, remixes using K.K.'s guitar, and NES Night (Famicom Night in Japan), which uses 8-bit remixes.

On the player's birthday, DJ KK will play a special remix of "K.K. Birthday," and during New Year's he will play a remix of New Leaf's title theme. The player can also place up to four Gyroids on Club LOL's stage which will randomly make noise to the beat. During DJ KK's concerts, the player can perform different dances by pressing directions on the D-Pad.

While initially absent from Animal Crossing: New Horizons, DJ KK makes his reappearance in version 2.0 update. He can be invited to Photopia and The Roost. He mentions when invited to The Roost that he may or may not be K.K. Slider.

In Animal Crossing: New Horizons – Happy Home Paradise, DJ KK appears upon the player designing the apparel shop, which is unlocked by designing 30 total homes. Upon the first activation of the event, "ending" sequences occurs with the player dancing alongside Lottie, Niko, Wardell, and various villagers, alongside a recap of the various houses they designed. This sequence can be replayed during music festivals by talking to employees of facilities or Lottie, Niko and Wardell and selecting "let's go dancing!". If facility employees are invited, any other villagers inside the facilities appear in the sequences instead of the villagers on the beach. Additionally, Wilbur can also be invited to dance, in which case the opening of the sequence focuses on him instead of the player. After the first music festival performance, Wardell explains to the player, Lottie, and Niko that DJ KK was a friend of his, subsequently inviting him to the main archipelago island.

During the event, villagers that the player designed houses for wear special t-shirts and bandanas, while villagers who have not had houses designed for them simply wear their default clothing. Additionally, during the event, the apparel shop sells parts of the outfits the villagers wear to the event. DJ KK plays house remixes of his songs like he does in New Leaf; all songs except "K.K. Birthday" have remixes. While the remixes sound very similar to the ones in New Leaf, they are not the same remixes, with a cymbal crash being added to the intro of songs, and some songs such as "K.K. Jongara" have their transitions to intermissions altered. The event's intro cutscene and intermissions use a remix of the leitmotif from Happy Home Paradise's designing themes. The intermissions and outro can vary in key depending on the song played before.

Unlike in Happy Home Designer, DJ KK has a separate house from K.K. Slider rather than simply being an alternate outfit.

In Animal Crossing: Happy Home Designer, "K.K. Slider" and "DJ KK" are alternate outfits for the singular entity referred to as "K.K." Their dialogue is identical.

In Animal Crossing: Pocket Camp, DJ KK's beat booth is a special furniture that was available from April 27 to June 26, 2019. This furniture is obtainable by crafting and costs

350 Leaf Tickets. While using the booth, he will cycle between remixes of the game's main theme, the Campsite theme, and the OK Motors theme.

Before the release of Animal Crossing: New Horizons, K.K. Slider previously appeared live during the Splatoon concerts at the Nintendo Live 2019 event in Kyoto, where he performed "Welcome Horizons".[4] 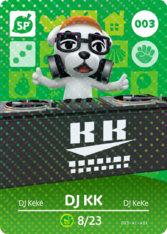