"This lady in a fancy dress came over and gave me direction to the station! She said..."
— Frillard, Animal Crossing: City Folk

Frillard, also known as Master Frillard, is a lizard in Animal Crossing: City Folk. He makes his appearances in the Marquee taking Dr. Shrunk's place on rare occasions. He is deep-voiced, like cranky villagers. His name derives from him being a frill-necked lizard.

Frillard is a yellow frill-necked lizard with gold spots around him. He has thick, white eyebrows and seems to be old; in one of his performances, he says 110 is young. He also uses a cane and has purple clothing.

In Animal Crossing: City Folk, villagers at the city describe Frillard as a great entertainer with his humorous jokes. They also mention that Dr. Shrunk is Frillard's student.

Frillard teaches six different emotions unknown to Dr. Shrunk. They are as follows:

There is no way to know when Master Frillard will perform next. He can only be seen by talking to the Marquee clerk and choosing one of Frillard's corresponding emotions, if they are available at the time.

Though Frillard does not appear in Animal Crossing: New Leaf, Dr. Shrunk will refer to the jokes that correspond to the six emotions Frillard taught in City Folk as belonging to his master.

Though Frillard does not appear in Animal Crossing: New Horizons, if the player invites Dr. Shrunk to The Roost, he may occasionally reference him in his dialogue.

Frillard appears as a spectator in the Town and City stage and as a trophy. 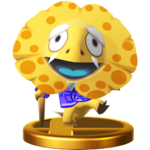