Not to be confused with Gulliver.

Gullivarrr is a seagull in Animal Crossing: New Horizons introduced in the 1.3.0 Free Summer Update Wave 1 who shares strong similarities with Gulliver. Similar to Gulliver, the player can encounter Gullivarrr as he washes ashore dressed as a pirate captain. His name is a portmanteau of Gulliver and arrr, a phrase used by pirates in popular culture.

Gullivarrr strongly resembles Gulliver, being a white seagull with an orange and black beak and thick orange eyebrows. He is dressed with a pirate hat and a red tattered Sea Captain's Coat. His eyes differ slightly from Gulliver's, with his pupils being shaped like X's rather than diamond-star symbols, as well as having dark rings around his eyes.

Like Gulliver, Gullivarrr loves sleeping and talking in his sleep at the same time after washing up on the shore of the player's island's beach(es). He will not wake up until the player talks to him multiple times. If the player then helps him find his single communicator, he then becomes grateful and rewards the player with different kinds/types of items from the Pirate Series or pirate-themed articles of clothing the following day.

Like Kapp'n and his family, Gullivarrr has a pirate-like accent, since he is a pirate himself. 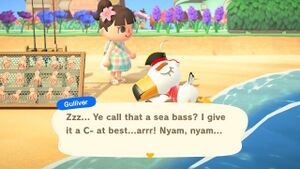 Gullivarrr talking in his sleep in New Horizons.

Initially, as the player repeatedly tries to speak to the character to wake him up, the nametag above the dialogue box will say Gulliver; however, once he is awakened, he will introduce himself as Captain Gullivarrr, and his nametag changes to Gullivarrr accordingly. He will then ask the player to retrieve his single Communicator (contrasting from the five Communicator Parts Gulliver asks for). The communicator can be found in the sea and must be retrieved by diving with a wet suit. Once the communicator is found, Gullivarrr will contact his pirate crew, and the next day, the player will receive a letter from Gullivarrr containing an item from the Pirate Series or a pirate-themed article of clothing.

Despite the names, appearances, and predicaments being similar between Gullivarrr and Gulliver, Gullivarrr does not recognize the player, even if they have already met Gulliver.

The following items can be received from Gullivarrr after his Communicator is returned. 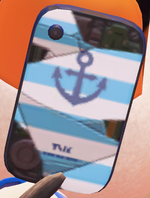