For the character whose Korean name is Katrina, see Harriet.

Katrina is a panther in the Animal Crossing series who tells the player their fortune. She appears in all games to date. In Animal Crossing, she has a male voice like Gracie and Saharah (who are both male in Japan), but in later games, she has a female voice.

Artwork of Katrina from Doubutsu no Mori.

Katrina is a dark-blue panther with light-blue inner ears, and a dark-red inner mouth. Her big half-closed eyes have white sclera, bright orange irises, black pupils, and purple makeup. Each of her arms has a dark-pink paw, grayish-blue fingernails with a little bit white, and a gold ring-shaped garter. Her eyelashes and feet are bluish-gray, while her tail is dark-blue, light-blue and bluish-gray. She wears a red veil (a white hairband in Doubutsu no Mori) covering her small tuft of hair, gold jewelry headdress with a red gem, and a dress with multiple colors (red, purple, pink, dark-red, dark-purple and goldish-yellow).

Katrina talks like a snooty villager or a wise woman, due to her job as a fortune-teller.

Artwork of Katrina from Animal Crossing.

In Animal Crossing, Katrina appears in town when selected as one of the two weekly random visitors. She is found inside Katrina's tent, which will appear at a random signboard. Like all visitors, Copper lets the player know when she will appear in their town if she is the next visitor coming.

When spoken to, Katrina asks the player if they would like a reading for 50 Bells.[1] If the player accepts, Katrina begins chanting to read the player's fortune.[2] She then says 4 phrases, each of which are randomly selected from their own list of 32 phrases. There are 1,048,576 possible combinations of phrases here. The format is as follows:

Katrina then says that's what she sees and then proceeds to give the player dialogue corresponding to one of the 6 possible types of luck given to the player by the fortune telling.[3] There is a 50% chance of receiving neutral luck and a 10% chance to receive each other type. Each non-neutral type applies different effects to the player for the remaining duration of the day. The types, along with their dialogues and effects, are as follows:

After telling the player their fortune, Katrina says that is all and takes the 50 Bell fee.[4]

On New Year's Day, Katrina will set up a desk by the wishing well, giving the player a letter with a fortune in it.

Katrina's role in Wild World is generally the same as in the original Animal Crossing, however, Katrina uses cards to read the player's fortune rather than a crystal ball. There are only three possible outcomes in Animal Crossing: Wild World: good luck, bad luck and neutral. The card that Katrina reads out will be in either a natural or inverted state, with natural state usually meaning good luck and inverted state bad luck, but this is not always the case. Katrina's tent will appear randomly in front of the town hall on a random weekday. She can tell the player their fortune for 100 Bells. Additionally, she can tell players how compatible they are with someone else for 100 Bells or cleanse their spirit (which clears the effects of bad luck) for 10,000 Bells.

In City Folk, Katrina can be found in the city in the building furthest to the right, telling fortunes or lucky charms for 100 Bells. She will greet the player by the player's star sign. She can tell the player their fortune once a week (effect lasts for the rest of the day), and/or she can give the player a charm for that month, usually involving strange tasks. However, the player who is given the fortune cannot obtain the charm - the task stated by Katrina (such as planting a number of trees or pulling a number of weeds) needed to be done by a visiting player and only they could obtain the charm. One would have had to cooperate with a friend to do the prescribed tasks in each other's towns to obtain the charm.

Before the Nintendo Wi-Fi Connection was shut off on May 20, 2014, out of town players could get one of the following beneficial effects the next day, as stated by Katrina, from a lucky charm:

In Animal Crossing: New Leaf, Katrina visits the player's town in a tent at the event plaza on random weekdays and will tell the player's fortune for 500 Bells. Once players in town have had their fortune told twenty times, and the mayoral player has spoken to Katrina after twenty fortunes have been told, the Fortune Shop on Main Street will become available as a public works project, which requires 340,000 Bells to complete. Completing the project will allow the player to have their fortune told every day, although Katrina's tent will fail to show up in town any more. Talking to them via the Fortune Shop or through the Lovely Phone will reveal the player's Luck for the day. 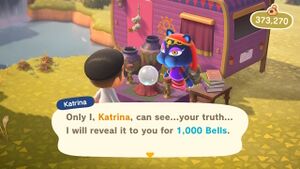 Katrina was added to Animal Crossing: New Horizons in the 2.0 Free Update. After the player donates 100,000 Bells to the Lloid on the far left at Harv's Island she will set up her store. Each day for 1,000 Bells each, Katrina offers to tell the player if they will have more or less luck with belongings, friendship, health or money, and to check their friendship level with one of the villagers on their island. If Katrina predicted bad luck with something she will offer to perform a purification ritual in order to nullify the bad effects. If Katrina saw that friendship with the villager could be improved she will offer to pray for it to be better. Each action costs 10,000 Bells. In addition, Katrina's poster can be obtained from Nook Shopping after inviting her to Photopia via her amiibo.

Katrina also appears in the NookLink app in an update released on March 30, 2021.[5] Her Words of Wisdom appear when a player collects their daily Nook Points. 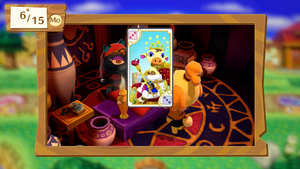 Isabelle visiting Katrina at the fortune-teller's shop in amiibo Festival.

Katrina appears as a visitor in the Board Game mode of Animal Crossing: amiibo Festival. If a player lands on a special-event space while she is visiting, they appear in the fortune-teller's shop and can draw a tarot card that affects their luck for one week.

Katrina appears as a trophy and a sticker in Super Smash Bros. Brawl.

Katrina appears as a trophy in Super Smash Bros. for Wii U. 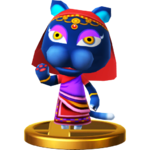 Katrina appears as a spirit in Super Smash Bros. Ultimate.

Bad luck is just luck that is bad.

Bad luck is just luck that is bad. 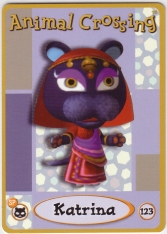 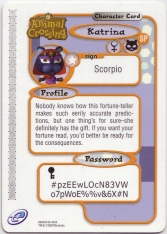 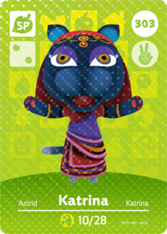