For the Wii U application, see Animal Crossing Plaza.

The plaza is in many ways similar to the wishing well in Animal Crossing and Doubutsu no Mori e+, and it also replicates certain functions of the town hall from Wild World and City Folk. 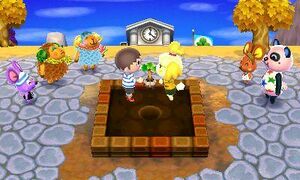 The town tree being planted in the plaza

At the beginning of Animal Crossing: New Leaf, the player who is designated mayor will participate in a ceremony and plant a sapling in the center of the plaza. The sapling will grow steadily based on the amount of time the game has been played, going through five different stages of growth until it ultimately reaches a humongous size. If a player sits on the brick wall surrounding the town tree once it reaches a certain size, they will be able to view a list of accomplishments and statistics during their time as mayor.

During events or holidays, special characters can be found here, including Chip, Nat, Katrina, and Redd, who will set up tents or stalls whenever they visit the player's town. Additionally, other attractions such as face boards may be present during some events. In other events, Isabelle can be found within the plaza and will give each player a gift, much like Tortimer does in previous games. Whenever Isabelle is present in the plaza, the town hall will always be closed.

Much like the plaza from New Leaf, events throughout the year such as the Bug-Off and Fishing Tourney are hosted here, and traveling visitors such as K.K. Slider, Label, Kicks, or Leif will periodically appear here to offer their services.

Players cannot place their own furniture in the plaza; however, furniture items such as benches, stools or barbecues may appear there from time to time, either randomly or for specific events, and cannot be moved or taken by the player. Changes can sometimes be triggered after exiting a building; setup and cleanup of this furniture will not be shown on-screen. Occasionally, a villager or group of villagers does an activity in the plaza, such as exercising or singing.