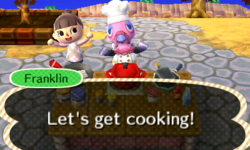 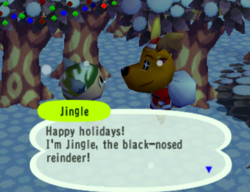 In the Animal Crossing series, events are occasions that differ from the standard gameplay experience and usually offer unique items. Events are often based on real-world holidays, and they are hosted by special characters. They can occur as often as often as four times a year or as rare as once every four years and are usually announced in the bulletin board, town hall, or Resident Services.

In games prior to Animal Crossing: New Horizons, many minor events occur throughout a year, where a special item is received by talking to a character. Additionally, in all games, larger events, such as Halloween and Toy Day, occur more rarely and feature a unique character and a quest that can result in receiving items in a series of special furniture.

Attending events is optional, but some are triggered upon launching the game, when a special character asks the player to come with them for a brief moment.

In Doubutsu no Mori and Animal Crossing[edit]

See also: Events in Doubutsu no Mori and Events in Animal Crossing

Doubutsu no Mori features relatively few events compared to its GameCube port, but includes major ones such as Halloween and Toy Day. Doubutsu no Mori+ adds several minor events, and the international versions replace many of the Japan-inspired events with new ones that would be more familiar to North American players, such as Groundhog Day and Labor Day. One major event, the Harvest Festival, is exclusive to international versions.

Most minor events in Animal Crossing are set up the same, with Tortimer appearing near the wishing well and giving the player an item themed around that event if spoken to, as well as offering some unique dialogue for each event.

Animal Crossing: Wild World removes all holiday-based events from the previous game (with the exception of the Countdown and New Year's Day) in favor of unique events like Yay Day, La-Di-Day, and Bright Nights. According to series creator Katsuya Eguchi, this was because after the lengthy North American and European localizations for Animal Crossing, the developers set out to remove region-specific events from the game to make the game understood worldwide.[1]

Animal Crossing: City Folk brings back many of the holiday-based events from Animal Crossing while adding some, including several minor events and two new major events: Bunny Day and Festivale. Additionally, City Folk features region-exclusive events for North America, Europe, Japan, and Korea that can only be experienced if the player is in a town from a copy of the game from one of those regions.

The minor events in City Folk work mostly the same as in Animal Crossing, with Tortimer telling the player about the event and giving them an exclusive item, though he is now located outside town hall.

Animal Crossing: New Leaf's events are mostly in the same as in Animal Crossing: City Folk, with some minor events being added, as well as one major one: April Fool's Day. Minor events are celebrated in the event plaza, where Isabelle will tell the player about the event and give them an exclusive item; sometimes, there is also a cardboard cutout in the plaza where the player can pose for a screenshot. Region-exclusive events return from City Folk.

New Leaf's Welcome amiibo update adds one new event, the Town Anniversary, which is celebrated on the anniversary of the mayor moving to town.

Animal Crossing: New Horizons, unlike previous games, did not have any events at release, with the exception of Fishing Tourneys, Bug-Offs, and the Countdown. Several events were subsequently added via updates, including Bunny Day, Nature Day, May Day, International Museum Day, Wedding Season, Halloween, Turkey Day, Toy Day, and Festivale. Several of the events do not take place on a single day, but rather across several weeks or a month. Minor events do not return from previous games, though some real-world events are celebrated through Nook Shopping, where the player can purchase an event-themed item for a set period of time.

See also: Events in Pocket Camp
This section is a stub. You can help by expanding it.