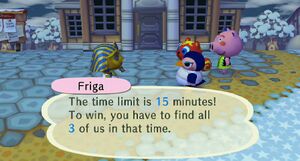 Friga explaining the rules of hide-and-seek to the player in Animal Crossing: City Folk

Hide-and-seek is initiated by a villager, who will ask the player if they want to play. If the player accepts, the player and villager, as well as two other villagers, will appear outside town hall in City Folk or in the event plaza in New Leaf. The villager who initially asked the player to play will explain the rules, which are that the player must find the three of them, who will hide outside, within 10 or 15 minutes.

Curly hiding behind a signpost in Animal Crossing: City Folk

Once the game starts, the villagers will disappear and the player must find them within the time limit, which is displayed on-screen. Villagers can hide behind trees, buildings, signposts (in City Folk only), and public works projects (in New Leaf only), and they will occasionally look out from their hiding spot, revealing themselves. When the player finds a villager, they must speak to them; when the player finds all three villagers, they will return to town hall or the plaza and they villager who initiated the game will give the player a random item as a reward.