Animal Crossing: New Leaf was unveiled at E3 2010 with a gameplay trailer. Shortly after, there was news that the player could be the mayor of the town,[4] with the goal being to make the town a better place to live.[5] A non-playable demo was also available on the show floor at Nintendo's booth as an example of the 3DS's 3D effects.

Like all Animal Crossing games, New Leaf is an open-ended game where the player takes the role of a human moving into a town of animals. Tasks the player can partake in include socializing with villagers, collecting items, catching fish or bugs, and paying off their home loan. The game takes place in real-time, meaning the in-game time of day and year matches that of the Nintendo 3DS. The time of day and year affects aspects of gameplay such as whether or not shops are open or villagers are awake, seasonal events, and the availability of certain fish, bugs, and items. Up to four players can live in a town, with each one having their own house. 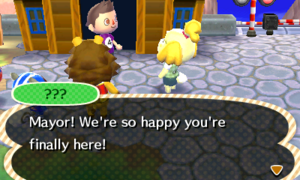 In July 2016, an update for New Leaf including amiibo support was announced.[9] On November 2, the update was fully revealed as the Welcome amiibo update in a 16-minute Animal Crossing Direct, and it released the same day.[10]

The Welcome amiibo update several new features. One feature is the campground, where the player can purchase items from Harvey with MEOW Coupons, a new secondary currency, and visit the RVs of villagers and special characters. Additionally, Wisp returns, now allowing the player to scan amiibo card or figures; the player can choose to either bring the respective character to the campground in their RV if they are compatible, or if they are a villager, have them move into town. The update increases the villager count from 339 to 399, with 14 new villagers and 46 returning after being absent from Wild World, City Folk, and the base version of New Leaf.