The player, also known as the villager or boy/girl, is a term used for the playable human character in the Animal Crossing series. The player may be either a boy or a girl; the differences in all games are largely cosmetic and with slight variations to some dialogue whenever the conversation becomes gender specific. However, in the English language text of Animal Crossing: New Horizons, gender is instead referred to as 'style', and all villagers will refer to the player with gender neutral pronouns.

Artwork of a female player from Animal Crossing (left) and New Horizons (right).

Just like the animal villagers, the design of the player characters has changed noticeably across the course of the series. Generally, the line between male and female players has become less concrete with each new installment, and the characters themselves have become more customizable.

In Doubutsu no Mori and its GameCube ports, players are short and stubby with large heads and relatively slim limbs. The female and male player models are distinguished through their hats and clothing. The female character's hat is a cone-shaped "princess cap", while the male character's resembles a spiked Viking helmet. Designs that are worn will always use the same pattern, but vary between a dress for female characters and a shirt for male characters, with the pattern also applying to the hat. The player's face and default clothing are determined by questions answered upon starting the game. The player can receive a tan by sunbathing during summer.

In Animal Crossing: Wild World, headwear was made into its own category of clothing that can be swapped out or removed, allowing the characters' hair and ears to be seen for the first time. Facial accessories can also be worn. Harriet allows the player to get haircuts, changing the hair's style and color, and she will allow hairstyles from the other gender to be selected if one has had all hairstyles of one's gender from her.

In Animal Crossing: City Folk, the player can have their shoes shined by Kicks, which will change their color. The other gender's shoes can be worn after having Kicks shine one's shoes 16 times. Also, the Mii mask can be worn to give a character a Mii's head.

The player characters were redesigned to be taller and slimmer in Animal Crossing: New Leaf (a change which remained in all future installments), and the clothing system was overhauled. Tops, bottoms, and dresses are now individual categories of clothing — boys can now wear skirts and dresses, and girls can now wear pants and shorts. Shoes and socks are now separate articles of clothing as well, so the player can mix and match styles, or go barefoot. Gender now primarily determines which dialogue is displayed, as well as the color of the player's Town Pass Card. Face and hair styles are still locked by gender, though the other gender's hairstyles can still be unlocked from Harriet.

In Animal Crossing: New Horizons, players are referred to by gender as little as possible, depending on the language, and are referred to with gender-neutral pronouns in the English version. Accordingly, no clothing or other aspects of the player's appearance are locked by gender. Although it has no impact on their appearance, one of two "styles" is selected for the cases where a language must use gendered terms. Bags are introduced as a new form of clothing, and wardrobes now allow for changing all clothing items at once.

Though players are not the only humans in the Animal Crossing series, as Mom and Dad occasionally letters send letters to them, they are only the humans present in gameplay. In spite of Mom referring to childhood events and the home that the player once lived in, and occasionally sending presents in the mail, there is no indication of any real backstory to the human character(s).

Players rarely talk aside from answering questions, remarking about an accomplishment, and talking in Happy Home Showcase.

In the main series prior to Animal Crossing: New Horizons, the player's face is determined by a series of questions that the introductory character asks, and it cannot be changed afterwards.

In Animal Crossing, the player's face style is determined through the answers given to the first three questions Rover asks at the beginning of the game while riding the train to town. The fourth answer will determine if the player's answers will be taken into account for generating their appearance. If "Oh yeah!" is chosen as the answer to that question, the player's prior answers are ignored and their face will be randomized.

In Animal Crossing: Wild World, the player's face style is determined through the answers given to the questions Kapp'n asks at the beginning of the game while in the taxi.

In Animal Crossing: New Leaf, Rover asks the player questions while they are boarding the train. Depending on the questions answered, the player can get various facial styles including hair style, randomly-colored eyes, and the starting outfit. The starting shirt will be different depending on when players make their villager; if they have created in from spring to summer, they are wearing a short-sleeved shirt, and from fall to winter, they are wearing a long-sleeved shirt.

Additionally, New Leaf introduces four brand new faces for each gender, but one of the male faces resembles a female-exclusive face in previous games. 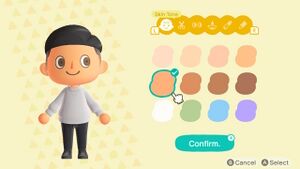 The player being allowed to customize their skin tone, among other traits.

The player's face and starting hairstyle are no longer determined by a series of questions; instead, the player can fully customize their appearance using a character-creation interface at any time by interacting with a mirror or vanity. Additional hair styles and colors can be bought using Nook Miles. Bags can now be worn by the player. In addition, more than one accessory can be worn at once, depending on where on the face it is worn; for example, the player can wear glasses and a doctor's mask at the same time, which was not possible in previous titles.

In WarioWare: Smooth Moves, one of the microgames involves the player taking control of a character, the gender corresponding to that of the controller's. The player must pull the Wii Remote up at the correct time to catch a fish.

In Super Smash Bros. Brawl, a number of human characters appear in the background of Smashville. Both the male and the female players are available as stickers, while the male character is also available as a trophy named "Animal Crossing Boy."

Artwork of a male Villager in Super Smash Bros. for Nintendo 3DS / Wii U.

On June 11, 2013, Nintendo revealed their new Super Smash Bros. video game for the Nintendo 3DS and Wii U at E3 2013, featuring the "Villager" (むらびと, Murabito) as a new playable character.[1] The Villager is a boy with brown hair, wearing a red shirt with a light-blue number "1" printed on the front. The Villager's in-game moves include the ability to attack other players using a net, trapping them in pitfalls, and chopping down trees to cause damage. He is based on the default appearance for male characters, particularly from Animal Crossing: City Folk. Other seven skins are available, each with a different appearance, and alternating genders between male and female for a total of four skins representing each gender.

Artwork of a female Villager in Super Smash Bros. Ultimate.

The Villager returned as a playable fighter in Super Smash Bros. Ultimate, largely unchanged from their appearance in Super Smash Bros. for 3DS/Wii U. Notably, the Villager's 7th and 8th skins were given darker skin tones compared to the previous game. The Villager's unique Classic Mode path, titled "Mistake to Underestimate", has them fighting against other characters that may seem similarly unsuited for battle. The Villager also appears briefly in a cutscene in the game's Adventure Mode, and is one of the earliest characters available to unlock in that mode.

Artwork of the Villager in Mario Kart 8.

Two genders of villagers, based on their default appearances from New Leaf, have made a guest appearance in the Wii U game Mario Kart 8 as part of the Animal Crossing × Mario Kart 8 downloadable content pack (along with Isabelle and Dry Bowser from the Mario series), where they again are known as Villager. They do not make voice effects, but they will make a variety of emotions and the sound effects associated with them depending on the situation. Both villagers are classified as a middleweight, indicating average stats. Both villager types weigh slightly less than Mario and Luigi, but the male villager weighs more and has higher speed than the female villager, while the female villager has better acceleration, handling, traction, and off-road stats. Villager also returns as a playable character in Mario Kart 8 Deluxe.