Jingle is a reindeer in the Animal Crossing series who is the host of Toy Day. He delivers presents to villagers and players on the night of December 24.

Jingle's role is analogous to Santa Claus, a character associated with Christmas, the real-world holiday Toy Day is based on. However, Santa is an unseen character separate from Jingle who is mentioned by Jingle and villagers. Jingle's name is likely derived from a jingle bell, a percussion instrument commonly associated with the holiday season.

Artwork of Jingle from Doubutsu no Mori.

Jingle is a brown reindeer with pink inner ears, blue eyes with white pupils shaped like diamond stars, dark-brown eyebrows, red inner mouth, and a big black oval nose. His big and long horns and hands are light-yellow. He wears a Santa Claus hat, a Santa Claus shirt, a black belt with a brownish-yellow buckle around his torso, and a pair of black boots with brown forefoot bottoms.

Jingle is a lover of Toy Day, explaining why he hosts the event near the end of December.

Artwork of Jingle from Animal Crossing.

Jingle first appears in Doubutsu no Mori, as well as its GameCube port Animal Crossing. Jingle can be found wandering around town starting at 8 PM on December 24, on an unnamed event (referred to as "Jingle Comes to Town" in the official guide) which doesn't appear in a diary's calendar. He needs to be approached five times to receive an item of his series, also asking questions to determine what item the player receives such as flooring, wallpaper, and furniture all from the Jingle Series. He only gives out one present per player; however, if the player changes their clothing, he will not recognize them and will give them another item. However, doing this for long enough makes him realize they are the same character, though he simply laughs and does not ask for the furniture back.

Artwork of Jingle from City Folk.

After being absent in Animal Crossing: Wild World, Jingle makes a return in Animal Crossing: City Folk. Similar to Animal Crossing, Jingle can be found wandering around town starting at 8 PM on Toy Day (December 24) to midnight. During this time, he may also be found inside other villagers' houses, but only in the ones with their lights off (meaning they are outside). This is the only time in the game the player can visit a villager's house without the animal having to be inside. In one of the homes, Jingle will be inside dropping off presents. Upon talking to him, he will offer players a present, either one they can "lean on" or one they can "walk on," with further options of "huge things." These simply mean wallpaper "(lean on)," carpet "(walk on)," and furniture "(huge things)," specifically furniture from the Jingle Series. As in Animal Crossing, he will give only one present per person, but there is a way to obtain more furniture, as mentioned below:

To receive more presents from Jingle, players need to change only their face accessory (hats, helmets, and flowers also work) instead of a shirt to obtain more items of the Jingle Series. But, Jingle will hand out duplicate items, so this will have to be repeated many times before the full set is obtained. Jingle's will only remember the last 8 disguises, after which the player can receive new presents by wearing ones they wore earlier in the night.

Artwork of Jingle from New Leaf. 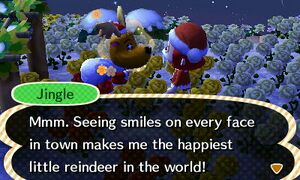 Jingle speaking to the player in New Leaf.

In Animal Crossing: New Leaf, Jingle can be found wandering around town starting at 6 PM on Toy Day (December 24). From December 1 to December 24, the Able Sisters and Kicks sell Santa clothes and accessories. To get a gift from Jingle, the player must dress as him and give presents to the residents. The required outfit consists of the Santa Hat, Beard, Coat, Pants, and Boots.

If players are wearing a full set of Santa clothes, they can help Jingle deliver presents to the residents. Before Toy Day, the villagers might randomly tell them what they want for Toy Day. This can be furniture, fruit, a shirt, an umbrella, wallpaper, or carpet. Each villager will give the player a maximum of two clues: one describing the type of item, and the other describing the color.

When the player finishes, they receive a Festive Wreath from Jingle. If all presents are delivered correctly, Jingle sends them Jingle's Pic in the mail the following day. 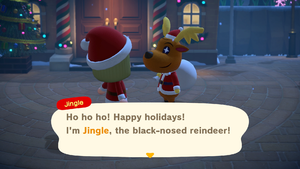 Jingle introducing himself to the player in New Horizons.

While initially absent from Animal Crossing: New Horizons, Jingle was added alongside Toy Day in the Free Winter Update. He returns as the host of the event.[1]

Jingle's poster can be obtained from Nook Shopping after inviting him to Photopia via his amiibo card.

Prior to its removal in version 2.0, when the player scans Jingle's amiibo card and tries to invite him, he will say:

Hey there! I'm Jingle. And you must be Player? What can I do for you?
You want me to... go campsite? Aww, I don't know what that is, but it sounds pretty fun.
But I'm afraid that I can't right now. This little reindeer has a lot of work to handle behind the scenes.
I hope to see you on the next Toy Day though. It's gonna be magical!

Jingle's photo was the first photo of a special character in New Horizons, and can be obtained from the Toy Day stockings.

Jingle appears for a seasonal garden event around Toy Day. Rather than Jingle directly giving a present, a Stuffed Stocking is found in the player's mailbox and is assumed to have been sent by Jingle.

Jingle appears as a trophy in Super Smash Bros. for Wii U. 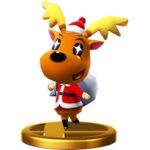 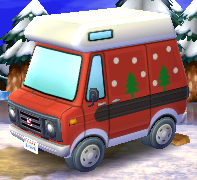 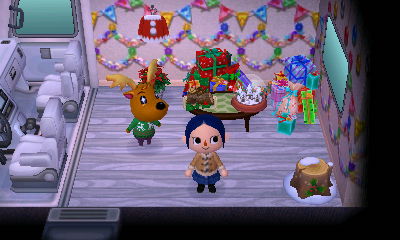 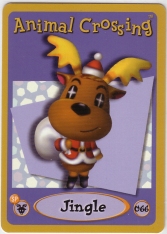 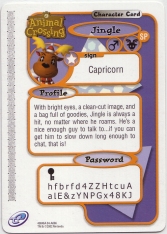 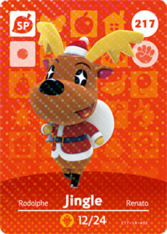