Saharah is a brownish-yellow camel with closed eyes, thick and long eyelashes, and brown hair. Her belly, hands and feet are white. The insides of her ears and mouth are pink. She wears a blue waistcoat with golden decorations, and a white backpack storing wallpaper, flooring and rugs in.

Saharah is calm and soft, even when selling her favourite interior items: wallpaper, flooring and rugs. She is characterized as a "foreigner" who may use strange wording and malapropisms.

In Japanese and Korean entries in the Animal Crossing series, Saharah is male, while in all other versions, she is female. However, her appearance, including her voice, is identical in all versions. Saharah shares this attribute with Blanca and Gracie. The reason for this is that when localizing Doubutsu no Mori+ into Animal Crossing, the localizers did not definitively know special characters' genders because unlike villagers, who have pink and blue name bubbles when speaking, all special NPCs have ambiguous green bubbles. Because of the character's long eyelashes (a trait all camels have) and the Japanese name ローラン (Rōran), which was interpreted as "Lauren," they assumed they were female and did not realize the mistake until Nintendo of Japan asked about the female gender on Saharah's e-Reader card.[1]

In Animal Crossing, Saharah makes her living selling rare and exotic carpets from faraway lands. Like most of the game's other special characters, Saharah sells items that cannot be found anywhere else. She does, however, have a different way of doing business than Tom Nook, as she accepts trade-ins. In order for the player to get their hands on one of her carpets, they must trade in one of their carpets along with some money, starting at 3,000 Bells. Her prices double each time the player buys a carpet, up to a maximum of 48,000 Bells. In Animal Crossing, she also retains her Japanese male voice.

In Animal Crossing: Wild World, Saharah gives rare wallpaper, taking over from Wendell. Instead of trade-ins, she asks the player to deliver carpet and wallpaper to special characters such as Blathers, the Able Sisters, Tom Nook, Pelly, and Phyllis, similar to the way that the player works for Tom Nook earlier in the game. In return, she will give the player a choice of either rare carpet or wallpaper.

She plays a part in the Golden Axe Trading Event, which involves the player trading various items to other special characters and in order for a chance to be given a Golden Axe. After the player gets to know Saharah, she will talk about how she "longs for a turban." When given a Turban, she will either give the player a Red Vase or a Massage Chair which can be traded to Tortimer to further the event.

In Animal Crossing: New Leaf, Saharah sells the player a new wallpaper and carpet for 3,000 Bells. When the player meets her, she asks them to lead her to their house. She then leads the player out of the house temporarily while redecorating the first floor room with a new carpet and wallpaper. Finally, she emerges and gives the player the old carpet and wallpaper. She can install typical walls and carpets as well as rare Saharah originals. She owns an RV in the campground and sells 9 items for 3 MEOW Coupons each. If she is in good terms with the player, she reveals that she has a crush on Tom Nook. 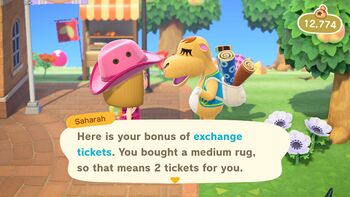 In New Horizons, Saharah can be seen wandering around the player's island weekly any day except weekends. When talked to, she offers "mysterious" wallpaper and flooring that are exclusive to her, which can be bought for 3,000 Bells each. Additionally, she now offers different sizes of mystery rugs: small for 1,000 Bells, medium for 1,500 Bells, and large for 2,000 Bells. Along with each rug purchase, the player earns "exchange tickets," which appear in the player's inventory as "Saharah Tickets." Once five tickets have been collected, they can be exchanged for a free mysterious floor or wallpaper that is missing from the player's catalog, or a random mysterious floor or wallpaper if they have them all in catalog. The amount of tickets earned depends on the size of the carpet (1 for small, 2 for medium, and 3 for large).

With the release of the 2.0 update, Saharah now has a shop open at the plaza on Harv's Island. However, she will continue to visit the player's island about every two weeks. Items sold at her Co-op are sold for 1.2x their standard price.

Saharah's poster can be obtained from Nook Shopping after inviting her to Photopia via her amiibo.

Prior to its removal in version 2.0, when the player scans Saharah's amiibo card and tries to invite her, she will say:

Saharah is speaking. You are who? Ah, Player is the you I speak to.
You have need of mystery?
A campsite for the going to? Oh, but bad, for I am the busiest of busy!
I see not camping in my future, unless it is a
A campsite made of floor coverings and toil.
But it is great in kindness of you to be inviting me! My happiness grows with thinking of it.

Saharah outside Crazy Redd's in Gekijōban Doubutsu no Mori.

Saharah makes a cameo in 🎬 Gekijōban Doubutsu no Mori, appearing outside Crazy Redd's during the Fireworks Festival.

In Super Smash Bros. Brawl, Saharah has a chance of appearing as a background character in the stage Smashville. She also appears as a collectible trophy and a collectible sticker.

In Super Smash Bros. for Wii U, Saharah still appears as a background character in the stage Smashville, in the new stage Town and City, and as a collectible trophy. 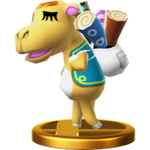 Life is full of many journeys. Where they lead, no one can know. 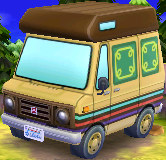 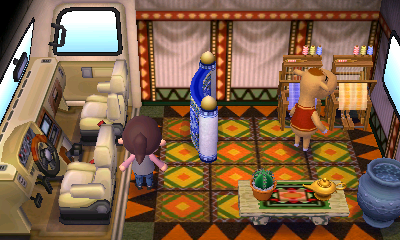 Life is full of many journeys. Where they will lead, no one can know. 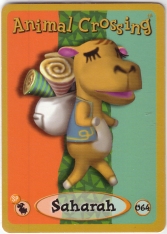 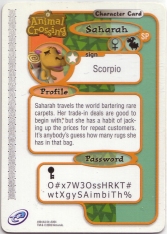 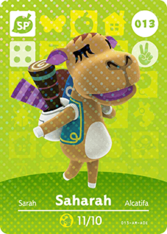 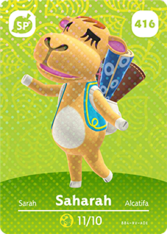