"All of your experiences can be a source of strength for you. If you ever find yourself in a tough spot, look at your badges and remember what you're capable of!"
— Phineas, Animal Crossing: New Leaf

Phineas is a brown fur seal with grayish-white bushy eyebrows and small round ears with reddish-orange insides. His beige muzzle has long black whiskers, small black freckles, a V-shaped upside-down mouth, and a dark-brown triangular nose with a little bit grayish-brown. There is a big dark-brown chin below his muzzle. His floppy hands and feet have dark-brown nails with brown-gray triangular linings. He always wears a small round pair of glasses with black frames and dark-gray lenses.

Phineas is portrayed as a kind-hearted individual who likes to bring joy to good children. 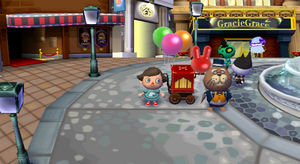 Phineas in the city in City Folk.

In Animal Crossing: City Folk, Phineas appears at random in the city from 9 AM to 7 PM on sunny or cloudy days. If spoken to, he will give the player a handheld item; the player can receive one item per day. While Phineas is present in the city, an extra baseline track plays alongside the standard background music.

Phineas can give the player the following items in City Folk: 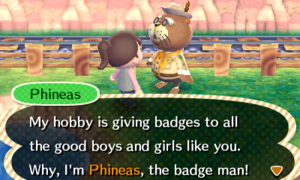 Phineas introducing himself to the player in New Leaf.

Phineas returns in Animal Crossing: New Leaf as a scout leader. He gives badges to "good boys and girls," appearing in the player's town from 6 AM to 12 AM on clear or mostly sunny days if they have met the requirement for a badge.

Phineas can also appear at The Roost when the player is partaking in a part-time job, and his preferred order is Kilimanjaro beans, lots of milk, and three spoonfuls of sugar.

While initially absent from Animal Crossing: New Horizons, Phineas was added in 2.0 Free Update. Phineas's poster can be obtained from Nook Shopping after inviting him to Photopia via his amiibo. He also can be summoned to The Roost.

Phineas appears as a visitor in the Board Game mode of Animal Crossing: amiibo Festival. If a player lands on a special-event space while he is visiting, he spins a roulette to see who wins a prize; each player has a section on the roulette, with the player who landed on the special-event space having a larger section. The player it lands on receives 2,000 to 3,000 Bells. There is also a rainbow-colored section on the roulette; if it lands on it, all players receive 5 Happy Points and 1,000 Bells.

Phineas appears as a spectator in the Town and City stage and as a collectible trophy in Super Smash Bros. for Wii U. 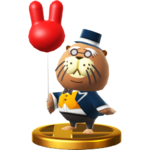 Every adventure starts with a single step.

Every adventure starts with a single step. 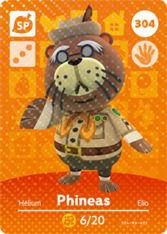