Snowman is a snowperson in Animal Crossing: New Leaf. He can be built by the player by rolling two snowballs together. Once built, the player can receive unique winter-themed items from him.

Snowmen are snowfolk, sharing the same appearances with their families. The only differences are that they have black eyebrows and black moustaches, their eyes are bigger and have orangish-yellow irises and black pupils with both having rectangular shapes, and they wear dark top hats with orange and yellow trims/bands above their brims. They are also the tallest snowfolk. 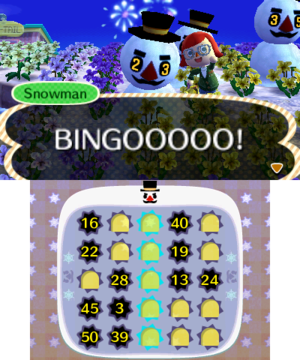 Winning the game of Bingo.

As with other snowpeople, a Snowman can be built from December 11 to February 25, and he is the largest of the snowpeople. The Snowman, when perfectly built, will offer the player a Bingo Card if they have yet to have one, and they will play bingo with them. The Bingo Card will always remain in the player's pockets and cannot be dropped, sold, or stored, unless if it becomes an Expired Bingo Card when either time traveling backwards or by the time winter ends. A player can only receive a Bingo Card by building a perfect Snowman and can only have one Bingo Card at a time.

The Bingo Card will be populated with numbers ranging from 1 to 50 inclusive, on a 5x5 grid. The center square is blank, and can be cleared. Winning bingo requires a clear of any five squares in a row: horizontally, vertically, or diagonally.

Playing bingo with a Snowman involves rolling his eyes for a number to pop out, and clearing that number on the Bingo Card. The Snowman's eyes turn into a number from 1 to 50. The number stays there until 6 AM, when the number resets and the player must roll his eyes again to receive a different number. This can be done while the Snowman has yet to completely melt and disappear, and it can be done in another player's town.

When a bingo is scored, the Bingo Card in the player's pockets will be replaced with a winter sports-themed item as a prize.

Imperfect Snowmen do not provide numbers, but they do converse with the player. A Snowman has the same voice as a cranky villager.

Snowman, alongside Snowmam, Snowboy, and Snowtyke, appears as a trophy in Super Smash Bros. for Nintendo 3DS.