This article is about the turtle. For the boar who Daisy Mae refers to as "Gram-Gram," see Joan.
"Shiver me timbers! Don't be sneakin' up on an old woman like that! Nearly scared me outta me shell!"
— Grams, Animal Crossing: New Leaf

Grams is an elderly turtle[nb 1] in Animal Crossing: New Leaf who appears on Tortimer Island. She is the mother of Kapp'n, mother-in-law of Leilani, and grandmother of Leila.

Grams is a green turtle/kappa with a bald spot surrounded by white hair, a big yellow muzzle, a red inner mouth, and red lipstick, being the oldest in her family. Like her son, Kapp'n, and granddaughter, Leila, she has closed eyes with white round rims, albeit also having eyelashes, with each eye having two. She wears a coral-shaped hairpin, and an orangish-yellow dress with white flower patterns with orange linings.

Like her family, Grams speaks with a stereotypical pirate-like accent. 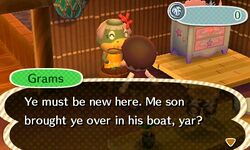 In Animal Crossing: New Leaf, Grams appears on Tortimer Island and runs a shop where the player can purchase unique items in exchange for medals. In the Welcome amiibo update, Grams's Pic can be obtained from Wisp if her amiibo is scanned.

Grams was added in the 2.0 update of Animal Crossing: New Horizons, appearing if any of Kapp'n's family is invited to the Roost via amiibo. Additionally, Grams's poster can be obtained from Nook Shopping after inviting her to Photopia via her amiibo.

Grams has a possible chance of appearing in the background of the stage Tortimer Island, and appears as a trophy.

In Animal Crossing: Happy Home Designer, Grams will share a house with Kapp'n, Leilani, and Leila. 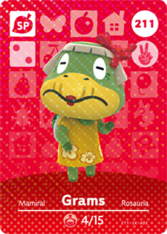