Phyllis is a purplish-pink pelican, unlike Pelly and Pete, who are white. Her tuft of hair's tip and wings/arms' fingers are white. Her beak and legs are yellow. Her beak's upper part is also her nose with brownish-orange linings and dark-purple insides. Her inner mouth is dark-purple. Her big round eyes have white sclera and black irises. Her small round cheeks are reddish-pink with dark-pink linings. She wears blue eyeshadow, bluish-black eyeliner, each three mascara strands sticking out of each eye, red lipstick, a dark reddish-purple dress with a light reddish-purple vest and big white puffy sleeves, and a large white ribbon.

When talking to the player, Phyllis will often mutter things under her breath, shown in gray subscript text in Bebebese, as she does not seem to enjoy having to work so late, unlike her younger sister Pelly. She has her own music for the town hall, starting as soon as her shift begins; it reflects her irritated mood and snappy conversation. In later games, her anger is toned down.

Phyllis is the clerk of the town hall in Animal Crossing: Wild World. She takes care of the civic center and post office centers. She's still very rude, but villagers say that she is incredibly efficient at her work, despite her attitude. When asked about the environment, Phyllis gives more detailed answers than Pelly. Whereas Pelly will often tell the player to "add more green," Phyllis will specify whether the player needs to add trees or flowers. Some characters sometimes state that they see Phyllis crying in the plaza at night, which may have something to do with the complicated romance between her co-workers, Pete and Pelly.

Phyllis can sometimes be found in The Roost from 9 p.m. to 10 p.m. on any day except Saturday. She states that she likes her coffee "black," or with no milk or sugar. If players save 500,000,000 Bells, they receive Phyllis's Pic.

In order to accommodate more than one player with the introduction of the Nintendo Wi-Fi Connection, Phyllis and Pelly can both be found in the town hall when a visitor arrives - Phyllis heads the civic center.

Phyllis still works in the town hall in City Folk, performing much the same role as in the previous installment. As with Wild World, villagers often tell rumors that her co-worker Pete is in love with her. When the player sees him walking around town delivering his letters, he always talks about Phyllis and will begin to ask the player questions relating to Pelly and Phyllis, showing his preference for Phyllis. He even reveals that others comment that she is "frosty," "aloof," and has a "personality like sandpaper," despite his infatuation for her. Pete has been known to send mail to Phyllis, as revealed when cranky villagers talk of replacing a fellow villager's house nameplate to the name "Phyllis," only for their victim to be inundated with "creepy love letters."

A further similarity with Wild World is Phyllis's job at the civic center; when the player connects to Wi-Fi and has visitors over.

In Animal Crossing: New Leaf, Phyllis once more works at the post office. As in the previous games, she works in the later hours of the day, from 10 PM to 7 AM, and she retains her cranky mood, but likely for the same reason as Mr. Resetti, her crankiness has been toned down from the previous games. Phyllis can be spotted in the Roost Café very late at night. Like her personality, she likes coffee that is very bitter. She takes no sugar in her coffee and will tell Brewster to give her two cups to-go so that she can bring some home to her sister. According to Phyllis, she used to make coffee and bring it to work every day before the café was built.

As in the games, Phyllis appears very rude and grumpy to those around her in 🎬 Gekijōban Doubutsu no Mori, making various critical comments, such as "This is boring."

Whenever you think about bugging me, just look at this photo instead.

Whenever you think about bugging me, just look at this photo instead. 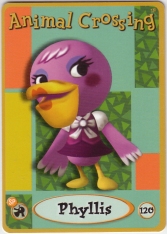 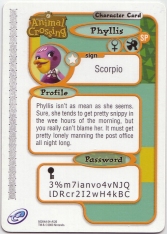 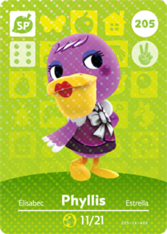