This article is about the location in Wild World, City Folk, and New Leaf. For the equivalent building in New Horizons, see Resident Services.

In Animal Crossing: Wild World and Animal Crossing: City Folk, the town hall is the place that players can deliver letters and recycle unwanted items - as well as where Tortimer (the town mayor) can be found during certain events, usually standing outside of the structure. The town hall replaces the wishing well, dump, and post office from Animal Crossing. It supersedes the wishing well by acting as the venue for the town's many affairs, including most, if not all, festivities. In addition, outside of and directly to the left of the structure is a bulletin board on which players can post messages and read those written by the various businesses in the town, special characters, and other villagers; at the beginning of Wild World, when driven to their new place of residence by Kapp'n in his black cab, the player is dropped off just outside the town hall - at the plaza in front of the structure.

The main area of the town hall has a counter that divides the building into two parts. Anywhere behind the counter is inaccessible to the player, and contains bookcases, mail sacks, and the mayor's desk, where Tortimer can be found sleeping. Pelly and Phyllis also work behind the counter.

The recycling bin is one of the surprisingly useful things in the town, and has the same function as the dump in Animal Crossing. The player can leave any unwanted items here to be taken away at 6 AM every Monday and Thursday. This can be useful for any items which cannot be sold to Tom Nook. Alternatively, the player can just choose to sell them for no extra Bells.

The most useful thing the recycling bin can be used for is collecting rare pieces of furniture, or other items. Sometimes, a rare item may appear, which is likely being disposed of by another villager. These items are usually ones that do not appear in the store often, and can be taken by the player to use at no charge whatsoever. If these items are left past 6 AM on the collection days, they will be permanently lost.

The recycling bin was removed in Animal Crossing: New Leaf. If the player installs a trash bin as a public works project or places a similar piece of furniture in their house, they can dispose of trash that way. Otherwise, they will have to pay a disposal fee at Re-Tail.

The Automatic Bell Dispenser allows players to deposit or withdraw Bells, and to pay their mortgage. The player can also ask the machine to issue them a new Shopping Card. The bell dispenser was absent in Animal Crossing: Wild World, and was moved to the post office in Animal Crossing: New Leaf.

The bulletin board is a message board outside of the hall, where messages can appear every day. The player can also post their own messages, and is where Tom Nook sends the player to post how "cool" his store is as a job at the start of the game. In Animal Crossing: City Folk, a small yellow bird appears on top of the board if there are unread messages, but will fly away when the player approaches. In Animal Crossing: New Leaf, the Bulletin Board is located outside the train station instead.

In Animal Crossing: New Leaf, the town hall serves a somewhat different role from previous games. Isabelle mans the desk and conducts civic functions, with banking and postal services having moved to the post office on Main Street. The bulletin board is situated outside the train station, the recycle bin is no longer present and events are now held at the event plaza in front of the Town Tree.

The town hall is the mayor's office, and this player can sit at their desk at the back of the building to begin the process of constructing public works projects and setting ordinances for the town.

The town hall is closed during events where Isabelle is in the town's plaza. During certain other events (such as the Fishing Tourney), the town hall will remain open but the mayor is not allowed to begin any new projects or change ordinances. If Isabelle is camping, Wisp will take over her role for the day but no services will be available as he does not know how to perform her job.

Once the town has achieved perfect town status, the mayor will unlock the option of renovating the exterior design of the town hall. There are three unique designs, and once altered, the building can be reverted to the default appearance if desired. The interior of the building remains identical no matter which design is chosen. 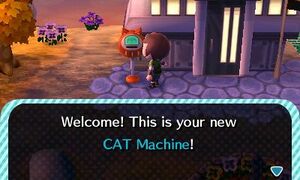 In Animal Crossing: New Leaf - Welcome amiibo, the CAT Machine (Coupon Allocating Terminal) is added outside the town hall and rewards the player with MEOW Coupons when they complete town initiatives. The machine will audibly chime and flash its screen when the player has completed initiatives to indicate that there are coupons that can be claimed. Isabelle will give an overview of the CAT Machine to the player during the tutorial when they begin Welcome amiibo for the first time.

In 🎬 Gekijōban Doubutsu no Mori, Ai enters the town hall shortly after arriving in Animal Village and meets Pelly and Tortimer. The building later appears in the background of several scenes, including during the Fireworks Festival and when Tortimer announces the winner of the Winter Festival.

The music in the town hall will change depending on who is serving the player. Pelly's theme is a cheery, bouncy song with a fast whistling melody. Phyllis's contains a very droll, onbeat chord sequence with a very pitchy guitar melody. Both songs give a good idea of each clerk's personality. Smashville in Super Smash Bros. Brawl has the town hall's music (along with Tom Nook's theme) play in the background. In Animal Crossing: New Leaf, Isabelle's theme played when loading the game is remixed for town hall.

This article needs to be updated.
Please edit this article to reflect updated content or newly available information. Relevant discussion may be found on the talk page.
Further details: Expand New Leaf section to the extent of the Wild World/City Folk section.

This article needs to be updated.
Please edit this article to reflect updated content or newly available information. Relevant discussion may be found on the talk page.
Further details: Expand New Leaf section to the extent of the Wild World/City Folk section.
Retrieved from "https://nookipedia.com/w/index.php?title=Town_hall&oldid=1057083"
Categories:
Hidden category: