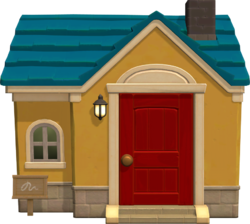 In the Animal Crossing series, in addition to player houses, villagers each also possess their own house. They usually move onto signposts around town, except in Animal Crossing: New Leaf, where they can move in anywhere where there is sufficient space, and Animal Crossing: New Horizons, where they move into plots placed manually by the player. Each house differs in appearance slightly and is furnished differently. When a villager moves out, their house will vanish from town, leaving behind a signpost and/or a patch of bare ground.

Houses owned by villagers are always 6x6 in size, and, in games past Animal Crossing, usually cannot be entered by the player unless the villager is inside, with a few exceptions, such as Toy Day in Animal Crossing: City Folk (where Jingle can be inside an empty villager's home).

In New Horizons, the two villagers that move to the deserted island with the player at the start of the game will each initially live in a tent. The player can either recommend the villager to place the tent where they are thinking of putting it, or they can freely choose where these tents are placed via a kit that the villager gives them. The villagers will reward the player for helping them, regardless of which option they choose. Once certain conditions are met, these two villagers will upgrade their tents into houses, having presumably paid their initial getaway package fee much like the player.

Players can interact with some objects in villager houses, such as musical instruments. If the player opens a storage unit, a message will be displayed, usually about how cluttered the villager's drawers are.

Birthday parties and Flea Markets take place in villager houses, and in the former instance another villager will be present. In Animal Crossing: New Leaf, another animal can sometimes be present even not on the villager's birthday.

In Animal Crossing: City Folk, an animal may lose the key to their house. The player can find it by fishing in the river, and return it to the villager for a reward. The villager will never be permanently locked out, though, even if the player does not help.

Villagers sometimes invite the player over to their house, and the appointment time (chosen by the player) must be at least 30 minutes into the future. The player can sometimes buy an item from the animal.

In Animal Crossing: City Folk, there are five different styles for houses: classic, pink, ranch, rustic, and stone (non-official names). Towns will only showcase one specific combo of two different styles: classic and pink, classic and stone, pink and ranch, ranch and rustic, or rustic and stone. There are five house exterior models, and each house model has fifteen variations (five different styles with three different colors each). Villagers are associated with five specific house exteriors, one from each house style, and these pools of exteriors are shared between several villagers. 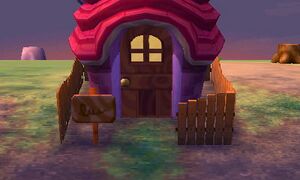 In Animal Crossing: New Leaf, each villager has a unique house exterior, although many of these look quite similar. Each house has a chimney that releases uniquely-shaped smoke plumes, which can be either oval, butterfly, fish, flower, or star-shaped. Oval-shaped is the most predominant type.

In Animal Crossing: New Horizons, each villager has a unique house exterior, although many of these look quite similar. After completing the 30th house and attending DJ KK's concert for the first time in the Happy Home Paradise DLC, the player can change a villager's exterior furnishings, including their roof, exterior, door, and any door decorations.

In Animal Crossing: Happy Home Designer, the player may customize the exterior of each villager's home and its surrounding area. Like in Animal Crossing: New Leaf, each house has a chimney that releases uniquely-shaped smoke plumes. The shape is identical to their New Leaf counterparts. 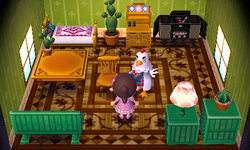 The interior of Goose's house in Animal Crossing: New Leaf.

Additionally, villagers may occasionally change the location of furniture in their house and randomly throw away furniture each day after moving in.

In New Horizons, the first five villagers' houses have default interiors with basic furniture, flooring, and wallpaper, tailored to their base personalities (as there will always be one each of jock, big sister, normal, peppy, and lazy)—whereas all subsequent villagers have furnishing customized to their individual characters as in past games. Nonetheless, there is still some variation in the exact items each villager starts with, based in part on character and the island's native fruit and flowers. The house exteriors are consistent with what those same characters would have gotten if they moved in later. Prior to the release of Happy Home Paradise these villagers were not able to "upgrade" to their default furnishings while on the same island, though if they are adopted by another island they will reset to their standard furnishings, and retain them if they then move back.

With the release of Animal Crossing: New Horizons – Happy Home Paradise, after completing the 30th house on the archipelago and attending DJ KK's first concert on the main archipelago island, the houses of the villagers on the player's island can be customized via Tom Nook, including the ability to reset to that villager's default furnishings, even for those in the first five. The player can also utilize lighting, soundscapes, and polishing when remodeling a house, though room-size adjustments will be unavailable for the remodeling of a villager's house. The player can also ask Isabelle to reset the villager's interior to their default furnishings, though this requires the ability for villager house customization on the player's island.