The blue marlin is a rare sea fish in the Animal Crossing series introduced in Doubutsu no Mori e+. It is one of the most expensive sea fish, selling for 10,000 Bells. It has a long, pointed extension of its mouth. The fish can be found all day and has a large shadow size.

"I caught a blue marlin! Why so blue, marlin?"

Blue Marlin is used as a cooking ingredient in the cooking recipes for the following items:

Blathers will talk about the blue marlin when donated dialogue.

During a Fishing Tourney, when given a blue marlin, Chip will say the following dialogue.

"Boy, I don't care what color blue marlin is as long as it's in my belly! Nyuuuk nyuk nyuk nyuk!"

"Of course, blue marlin are a bit too big to grill in just one piece. Unless you're experienced like me. Well, I think I'm just gonna tuck into this guy, no preparation needed! Behold my fish-eating skill! YUM!" 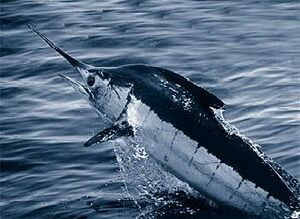 In the wild, it uses its big spear-like snout to attack fish and cephalopods that it may eat, such as tuna and squid. Represented in-game by the fact that it only appears in summer, the Atlantic blue marlin generally stays in the area of ocean south of Spain but north of South Africa. There are many names for this fish such as billfish, ocean guard, and Cuban black marlin.