The catfish (ナマズ, Namazu) is the most common lake fish. Selling for 800 Bells, the catfish is the second least expensive lake fish. It appears from May until October and from 4 PM to 9 AM.

"I caught a catfish! I think I'll name it Whiskers..."

"I caught a catfish! Who's meowing now?!"

"I caught a catfish! Do you think it has 9 lives?"

Upon donation to the museum, Blathers will give a generic comment about common fish:

"I've heard some claim that these fish taste a bit like eel, you know. If you want to sample it, <Player Name>, I'd recommend panfrying it. Indeed, I believe you could deep-fry a rock, and I'd enjoy it, wot!"

"Catfish are known the world over for their voracious appetites! They'll try to eat anything in one bite, up to and including things the of their bodies...or so I hear! The largest of these hungry fish can grow up to 40 inches in length... Imagine going down to the river and having one of those behemoths come at you! The horror!"

It can be found in the middle-left tank in the aquarium.

Blathers does not make a small talk about the fish in Animal Crossing: New Leaf, but there is an information board for the catfish.

"Catfish are known for their long whiskers, wide bodies, and large mouths, but they don't have fur. Despite having large eyes, they have rather poor eyesight. They make up for this with sensory whiskers. Catfish have small horizontal and vertical lines in their bodies, almost like perforated lines. These holes are for detecting weak electric currents of other fish, making them adept hunters. Catfish are artful carnivores as they swim around lazily, but then strike quickly when prey is found."

"Catfish don't have scales and are rather slimy. Believe it or not, this slime helps them breathe! Some species of catfish are nocturnal, and they'll feed on almost anything. They use a suctioning action to pull in their food. Did I mention they can grow as large as you or I?"

When donated, the catfish can be seen swimming around the large recessed tank in the freshwater section of the fish exhibit with the Bluegill.

During a Fishing Tourney, when given a catfish, Chip will say the following dialogue.

"If it's catfish we're talking about, you have to do tempura. Have to. No way around that, no, sir. I mean, I'm just gonna go ahead and eat it raw, but you know... Oh well. Mmmm. YUM!" 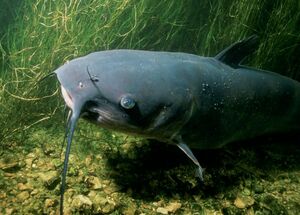 Catfish have one of the greatest range in size within a single order of bony fish. Many catfish have a maximum length of under 12 cm. Some of the smallest species of Aspredinidae and Trichomycteridae reach sexual maturity at only 1 centimeter (0.4 in). The Siluriformes are commonly caught in real life, usually in ponds or lakes. In some fiction, it plays a pun on the name 'Catfish' by making it have the head of a cat. In some parts of the world, catfish are eaten.