"I caught a surgeonfish! It's cobalt blue and beautiful!"

"I caught a surgeonfish! It was a simple operation, though!"

"For future reference, I recommend you remember surgeonfish and coral as a set, wot wot? These bright fish have blue bodies and yellow tail fins, and they make their home in the southern seas. ...And what delightful, easygoing expressions they wear! I feel relaxed just looking at them!"

The fish can be found in the bottom-right tank in the aquarium, with the Clownfish and Butterflyfish, which are other types of tropical fish.

"These tropical fish sport beautiful, yellow, triangular tails and elegant black lines on dazzling blue bodies. Personalitywise, the surgeonfish is actually rather laid back and timid. They seek out gaps in coral or between rocks for the greatest amount of protection while sleeping."

"Hoo! Careful, now! These fish are particularly dangerous, despite their seemingly docile appearance. With its saturated blue and yellow tones, the surgeonfish is quite breathtaking. It's got to keep up with all the other vibrant fish that live in the coral too, I wager. Quite the competition! Its spine is sharp as a blade, so care must be taken when handling these beauties..."

During a Fishing Tourney, when given a Surgeonfish, Chip will say the following dialogue.

"Can't say for sure, but I bet surgeonfish tacos with lime and cilantro would rule. Nyuuuk nyuk nyuk nyuk!"

"Surgeonfish, right? It's got a real distinct stench to it, all stinky and so on. Assaults the nostrils! I-I mean...I'm still gonna eat it. Of course I am! YUM!" 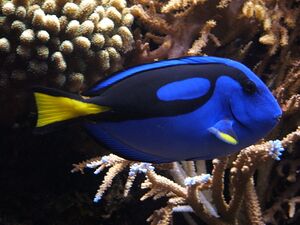 Surgeonfish are members of the family Acanthuridae and are named for scalpel-like modified fins on the peduncle (base of the tail). The species shown ingame is Paracanthurus hepatus, also known as the regal tang, palette surgeonfish, blue tang (not to be confused with the Atlantic Acanthurus coeruleus variety), royal blue tang, hippo tang, flagtail surgeonfish, pacific regal blue tang and blue surgeonfish. It is a tropical fish that lives in areas such as Japan, East Africa, Samoa, New Caledonia, and even the Great Barrier Reef, Australia.

They change color when spawning, from a deep blue to a pale blue. The eggs hatch within 24 hours of fertilization, revealing small larvae with silvery abdomen. They are inedible to humans, with a foul smelling flesh and taste, and are poisonous. They can, however, be used as a type of bait. It can easily protect itself using spines located near its tail, which extend when the fish is excited or threatened. It will slash sideways towards a predator and can cause deep wounds allowing venom to seep in, which can cause infections.