The carp[nb 1] is a freshwater fish in the Animal Crossing series introduced in Doubutsu no Mori.

"I caught a carp! Ouch! I hurt my wrist! It might be CARPal-tunnel!"

"I caught a carp! Carpe carp!"

"I caught a carp! Pretty sharp!"

"I caught a carp! I really seized the diem!"

"I caught a carp! If I catch another, they can carpool!"

Carp is used as a crafting material in the DIY recipes for the following items:

As with all fish and bugs in the Animal Crossing series, the carp can be donated to the museum by talking to Blathers, the curator. During the donation, Blathers will tell the player a little bit about the fish.

When the player donates a carp, Blathers will say this about it before thanking the player for their donation:

When the player donates a carp, Blathers will say this about it before thanking the player for their donation:

"I do believe many people enjoy this fish raw at sushi restaurants... I understand it makes a rather tasty addition to soups and chowders, wot!"

When the player donates a carp, Blathers will say this about it before thanking the player for their donation dialogue.

"...Hoo, tell me, have you ever had occasion to see the teeth of a carp? They're positioned far back in the mouth and can bite through seashells! I daresay you shouldn't go sticking your finger into a carp's mouth, wot? That is a mighty chomp!"

After donating a carp to the museum, a sign will display a description of this fish that says this:

"These tough fish have very long life spans, capping out at ages surpassing 100 years. Their whiskers are one of their trademark features, making them relatively easy to identify. They're omnivorous and eat waterweed and bugs by sucking their food into their mouths. They also have teeth in the back of their throats that help break down shellfish for digestion."

"Oh, the carp... have you ever seen their teeth? For your sake, I hope you have not! Carp have teeth in their throat strong enough to crunch on hard things like shells and fingers! A good rule of thumb when dealing with other species is to keep your fingers out of their mouths. Although, having neither thumbs nor fingers, I am quite safe from this little fellow!"

Once donated to the museum, the carp can be found in the recessed tank in the first fish room with the crawfish and giant snakehead.

During a Fishing Tourney, when given a carp, Chip will say the following dialogue.

"You know what carp are good for? Two simple words, my friend: chilled sashimi. Oh, goodness yes. Not that I have time for that, of course! Down the hatch it goes! YUUUUM!" 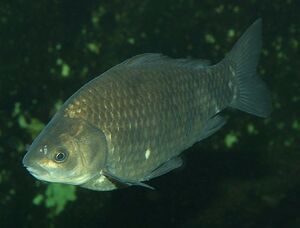 The common carp is a fish that prefers water between 7 and 30 °C. The fish can sometimes grow to over 1 meter in length. The species is native to Eastern Asia, but has also been bred in Hungary, Germany, Israel and Turkey over generations, and has been introduced into countries such as the US and Netherlands. They can eat up to 3 times their body weight every day — about 28 kg for a fully grown fish. Carp are especially common to eat in Eastern Europe, the Western Middle East, and Russia.