In Animal Crossing: New Horizons, the pop-eyed goldfish is a lucky item, meaning it gives a 777-point Happy Home Academy bonus when placed in the player's house.

When a popeyed goldfish is donated, Blathers will say this:

When a popeyed goldfish is donated, Blathers will say this:

"Popeyed goldfish look like any other ordinary goldfish whilst still juveniles. As they begin to mature, their eyes bulge outward and gradually assume that distinctive appearance. Imagine how appalled you'd be if you brought one home thinking it was a normal goldfish..."

An information board in the aquarium will display this description of the pop-eyed goldfish upon donation:

Once donated to the museum the pop-eyed goldfish can be found in the first exhibit room in the small tank with the ranchu goldfish and guppy.

During a Fishing Tourney, when given a pop-eyed goldfish, Chip will say the following dialogue.

"You know what's tough? Scooping up pop-eyed goldfish! It's almost impossible if you're not a wizard! Erm... Uh. Hey, look over there! I think I saw one of those wizards! OH, YUM YUM!" 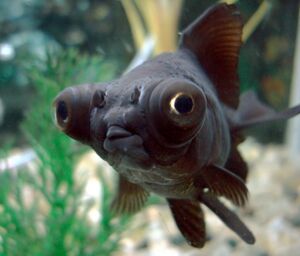 The Carassius auratus shares its scientific name with all types of goldfish. The pop-eyed goldfish, or Black Moor Goldfish, is a harmless fish that lives in slow-flowing ponds, ditches, rivers, and lakes. It is a specially bred type of carp with large, protruding eyes, which, to some people's surprise, has poor eyesight as a result of its heavy inbreeding. It is related to other types of telescope fish, carp and is indirectly related to the koi. It feeds off of small insects, crustaceans, and plants. In China, it is called the dragon-eye. They are good for people who are just starting their freshwater tank.