The bitterling is a freshwater fish in the Animal Crossing series introduced in Doubutsu no Mori.

"I caught a bitterling! I wonder what makes the little guy so angry..."

"I caught a bitterling! So small, so very bitter!"

"I caught a bitterling! But it's pretty sweet to me!"

"I caught a bitterling! What's it so bitter about?"

"I caught a bitterling! It's mad at me, but only a little."

As with all fish in the Animal Crossing series, the bitterling can be donated to the museum by talking to Blathers, who will follow the donation up with a small talk.

"Even run-of-the-mill, common fish are valuable resources, you see. All part of the grand tapestry, wot!"

Blathers will say this as the fish is donated:

"I must say, I've never personally considered eating one of these before. It's so very...goldfishy... No, not particularly tasty-looking, to be sure..."

After donation, the bitterling can be found in the front tank in the first room.

Blathers will say this when handed the small fish:

"It's quite common for enthusiasts to keep bitterlings in the same tank as tropical fish, eh wot? Indeed, once upon a time, this fish was a popular choice for the private fishing ponds of the rich!"

It can be found swimming around in the middle-left tank in the Aquarium after donation.

After donating the bitterling, the following information will be displayed by its tank:

"These fish are so small, they can fit their entire body in the palm of your hand. During mating season, the male's belly turns a light orange in order to properly attract a mate. They live in rivers and lakes and deposit eggs in large bivalves where the eggs hatch and live for a while."

The bitterling can be found in the larger of the two left-hand tanks in the freshwater fish room.

"Bitterlings hide their eggs inside large bivalves—like clams—where the young can stay safe until grown. The bitterling isn't being sneaky. No, their young help keep the bivalve healthy by eating invading parasites! It's a wonderful bit of evolutionary deal making, don't you think? Each one keeping the other safe... Though eating parasites does not sound like a happy childhood... Is that why the fish is so bitter?"

Once donated to the museum, the Bitterling can be found in the recessed pond in the entrance room of the fish exhibit with the Soft-Shelled Turtle and Loach.

During a Fishing Tourney, when given a bitterling, Chip will say the following dialogue.

"But BOY, do bitterlings really come into their own grilled with a little salt! Nyuuuk nyuk nyuk nyuk!"

"Oooh BOY. Want a little taste of heaven? Try a deep-fried bitterling. But you know me. I'm just going to eat it totally raw! YUM!" 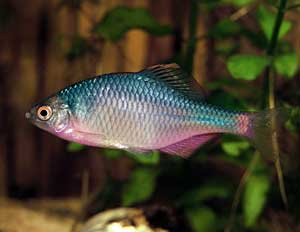 The Rhodeus sericeus or "bitterling" is a harmless fish that lives in ponds, lakes, marshes, muddy and sandy pools, as well as the backwaters of rivers. It feeds mainly on plant material but has been known to feed on small insect larvae. The Bitterling lays its eggs in the mantle cavity of mussels. The bitterlings can be found in central and eastern Europe, and are often seen in public aquariums, and can be bought for private aquariums. It is a low-risk fish (not under threat). There are also about 23 recognized species in this category of bitterlings.