The loach is a river fish in the Animal Crossing series introduced in Doubutsu no Mori. It can be found all day throughout spring.

"I caught a loach! You don't suppose it's Hylian, do you?"

"I caught a loach! Don't encroach on my loach!"

"I caught a loach! It's...looking at me with reproach."

The loach can be donated to the museum by talking to Blathers. During the donation, Blathers will say the following about the loach:

"Even run-of-the-mill, common fish are valuable resources, you see. All part of the grand tapestry, wot!"

"When I hear loach, I think of a friend of mine who makes smoothies of them. It sounds repellent, I know and to be honest, it is. Hop I say! The stench!"

"The loach is a slippery, somewhat vile-looking fish...but in truth, it can be quite useful, wot? For ages, some cultures used the loach as a poison treatment. It also tastes great in a hot pot... A bit of wisdom for the day, eh wot? One must never judge a person, or a fish, by its appearance..."

"Loaches are rather small fish that make their habitats in rivers and muddy water. They have 10 whiskers around their mouths with taste buds built in for tasting sweetness and bitterness. Loaches can breathe through their intestines as well as their gills―a rather unique quality of the species. They push their mouths above the surface of the water to inhale, exhaling through their tail regions. Making stew with loaches and burdock root is known to improve stamina, or so people believe."

The loach can be found in the leftmost tank of the freshwater fish room.

"Loaches are a large group of bottom-feeding freshwater fish. Because there are so many species, it is difficult to generalize about them all. The one thing they all have in common is perhaps their most unappealing trait; the name 'loach.' Repellent, isn't it? They should have just called it the 'cockloach' and been done with it, eh wot! Loach...loach... It just tastes terrible in the beak."

The loach can be found in the recessed tank in the freshwater room in the aquarium with the catfish and bluegill.

During a Fishing Tourney, when given a loach, Chip will say the following dialogue.

"That reminds me. Loach stew with veggies makes for a mean meal! Er, assuming you eat your veggies. I mean, I'm just gonna go for raw myself! You know me! YUM!" 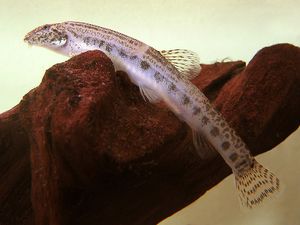 It is unclear what type of loach appears in Animal Crossing, since there are vast varieties of loaches. It is, however, a member of the Cobitidae family of loaches, called the True Loaches, which live in fast flowing waters. All true loaches are "bottom feeders," meaning they swim at the bottom of rivers and tanks eating the algae at the bottom. They also eat small crustaceans and insects, but only during the day. Under true loaches, it can be a horse-face loach which grows to roughly 20 cm (8 inch). This type of loach is a private and public aquarium favorite because of its eating habit which cleans a tank for the owner, making it easier to keep fish.