The Arapaima (ピラルク, Piraruku) is a river fish that appears in the summer. It appears between 4 p.m. and 9 a.m.. It is a very rare fish, making it the third most expensive river fish (10,000 Bells), after the Stringfish and Dorado and tied with the Arowana (which it is related to). Its shadow size is huge; similar to the Tuna and Stringfish, and likewise, it is the largest river fish. In the 'Bugs and Fish' window in City Folk, it is the last river fish. The fish is the second largest fish in the game, after the Shark at about 550 centimeters and it is tied for length with the Ocean Sunfish.

"WOW!!! I caught an arapaima! This thing is huge!" 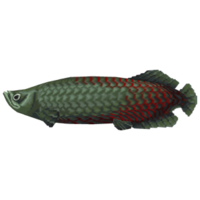 "I caught an arapaima! It's about time-a!"

"I caught an arapaima! And it looks like it's in its prime-a!"

"I caught an arapaima! How did it get here? Arapaiknow!"

Blathers will say this when an Arapaima is donated:

"My word! I've never seen such a tremendous specimen! A fish such as this is found only once in a great while. A true rarity among rarities! Extraordinary! Top notch! This, we will treasure, I assure you. Cross my heart and hope to molt. Hoo!"

Blathers' speech is as follows when the Arapaima is donated to the Museum:

"You might think a fish this big might not be appetizing, but it's simply delicious! The arapaima used to be abundant, but overfishing has sadly made them rare. One has to wonder how many species must suffer to satiate the world..."

When donated, it is in the second tank in the first room.

"My, it is massive, isn't it? Not just large, but the largest river-dwelling fish in the world, it's said. Records indicate a specimen some 200 inches (5 meters) in length has been sighted before... Looking at it now, the theory that this fish hasn't changed in 100 million years seems believable!"

This fish, when donated, will appear in the middle right tank.

An information board in the aquarium will display this description about the Arapaima after donation:

"Arapaima, at over two yards long, are one of the largest freshwater-fish breeds in the world. They've been around for over 100 million years, making them rather ancient fish as well. They breathe through gills but also with an air bladder used by poking their mouths above water. They have hard,coarse tongues that are used to break down the smaller fish they eat."

"The stately arapaima is quite large. Indeed, it is among the largest freshwater fish there are. Furthermore, these fascinating fish make quite the family unit. That is to say, male arapaimas protect their young by holding them gently in their mouths. Meanwhile, female arapaimas swim circles around these full-mouthed fathers fending off predators. It simply goes to show that cold-blooded creatures can be heartwarming too."

The arapaima is the largest freshwater fish in the world and it can be found in the Amazon River which is in South America. It is sometimes called the pirarucu or paiche. This fish can grow to about 3.2 metres, but normally about 2 to 2.5. The supposed maximum length is 4.5 metres, although this comes from an early 19th century second-hand report, and it has not been confirmed.The arapaima male is supposed to be a mouthbrooder, meaning the young are protected in its mouth until they are older. The female arapaima helps to protect the male and the young by circling them and fending off potential predators. Arapaimas breathe air and get their red coloring from their diet of red crusteceans.