The barbel steed is a freshwater fish in the Animal Crossing series. It first appeared in Doubutsu no Mori and has appeared in all subsequent games except Animal Crossing: New Horizons. It is found in the river all day and all year round. It is common and sells for 200 Bells. Its shadow size is between small and medium, the same size as a Carp.

"I caught a barbel steed! That's funny... It looks more like a fish than a horse."

As with all fish and bugs in the Animal Crossing series, the barbel steed can be donated to the museum by talking to Blathers, who will tell the player about it.

Blathers will say this upon donation dialogue.

During a Fishing Tourney, when given a barbel steed, Chip will say the following dialogue.

"Barbel steed, right? Yup, they got tons of little bones, but they make great tempura if you know the trick! I mean, I'm just going to eat it raw, but it's something to think about! YUM YUM!" 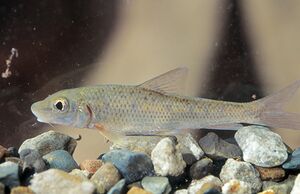 The Hemibarbus labeo or 'barbel steed' is a harmless fish that lives in the rocky, fast flowing bottoms of rivers. It is carp-like in appearance. The name 'barbel' is derived from the Latin Barba, meaning beard which is a reference to the two pairs of barbs by its mouth. There are different types of Barbels scattered across the world- they can be found in Europe, Asia and Africa. The Barbel Steed however, is an Asian fish, found in the Amur basin where it is locally referred to as the Amur barbel (Barbel Steed).