The gar (ガー, Gā) is a freshwater fish in the Animal Crossing series introduced in Animal Crossing: Wild World. It sells for 6,000 Bells, and it appears in summer from 4 PM to 9 AM.

"<Player>, if you plan to raise a gar at home, I have some crucial advice. You must be very careful not to overfeed it! These brutes grow much faster than you might suspect, eh wot? Before you know it, it could be bigger than you can handle! The horror!"

"Hoo, I daresay you've really fished a winner this time, my dear owlet! Gar can grow to massive sizes--up to 120 inches! Let's hope this new addition to our museum can grow to an equally enormous size..."

"Their long faces and large mouths make them look like alligators. Some can grow up to three yards. They are ancient fish that haven't changed since they first appeared millions of years ago. They breathe not only through gills, but also by sticking their mouths above the surface of the water. Gar eggs are poisonous, so people all over the world are advised to not eat them--no exceptions."

"Hoo hoo! So you have snagged a gar. Did you know this beastly fish can grow up to nine feet long? Indeed, the gar is a remnant of times long past--a living fossil, if you will. It not only has sharp teeth and armor-like scales...it has the ability to take breaths of air as well! Ah, to look upon this unusual fish is to get a glimpse of our prehistoric past."

Once donated to the museum, the gar can be found in the recessed fish tank in the first fish exhibit with the Pike. 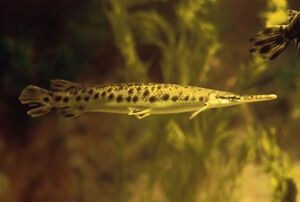 This fish can be caught up to about 4 meters (12 ft) in length. Its scales are diamond-shaped and are sometimes used for jewelry. It appears in North America, particularly the United States.

During a Fishing Tourney, when given a Gar, Chip will say the following dialogue.

"Fried gar will beat the fins off any fish in a fish-'n'- chips showdown... Probably. Nyuuuk nyuk nyuk nyuk!"

"By the by, my fisher friend, frying gar is certainly the best way to eat it when it's lunch or dinnertime. Though it works pretty well if I just swallow it whole too! No wrong way for fish! YUM!"