"I caught a salmon! And it made it all the way back here! Now, I feel bad."

"I caught a salmon! Welcome back!"

"I caught a salmon! It's all upstream from here!"

Salmon is used as a cooking ingredient in the cooking recipes for the following items:

As with all fish and bugs in the Animal Crossing series, the salmon can be donated to the museum by talking to Blathers. During the donation, Blathers will say the following about the salmon:

"Even run-of-the-mill common fish are valuable resources, you see. All part of the grand tapestry, wot! We will take excellent care of this fellow, oh yes. You can rest assured. Excellent care, indeed."

The salmon can be found in the back with the sea fish of the fish exhibit.

The salmon can be found in the first room of the fish exhibit in the second tank.

"Ahh... A salmon? Yes, quite! Everyone knows that salmon swim upstream to spawn... But did you know they don't eat for the entirety of their journey? Indeed! Salmon must enjoy pushing themselves to the limit... I hereby dub them the pro athletes of the river!"

The salmon can be found in the large left tank on the first level of the fish exhibit.

"Salmon are popular migratory fish that are born in rivers, migrate to oceans, and return in four years. In Japan, flavored salmon eggs are a very popular dish called ikura, but it hasn't caught on in the US. In rare cases, salmon will only stay in the ocean for one or two years before coming back. These fish are known as 'phantom fish' since they're so hard to find in the wild. Their characteristic pink color comes from the shrimp and krill they get in their diet. If they are differently, their flesh would be white."

"Ah, salmon... Did you know their coloration is due specifically to their diet? Indeed, this is the case! The more they fill their diet with crustaceans such as krill and shrimp, the deeper shade of pink they are. If they ate a bushel of carrots, might they turn orange?"

Once donated to the museum, the salmon can be found in the lower level of the waterfall tank with the king salmon and the sturgeon.

During a Fishing Tourney, when given a salmon, Chip will say the following dialogue.

"With salmon, you can grill it, bake it, fry it, steam it, boil it, zap it, toast it, poach it, or just EAT it. Whatever! Automatic num! Nyuuuk nyuk nyuk nyuk!" 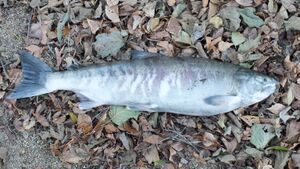 The Chum Salmon (also known as the Keta Salmon, Dog Salmon, and Silverbrite Salmon) is a species of salmon that mainly inhabits the Pacific and Arctic oceans. Like many other salmon, after spending their life wandering the oceans they travel to the brackish water of river-mouths to spawn. Because the salmon have become so used to the salt water of the sea, they deteriorate rapidly after spawning and die. Oddly enough, they often return to the freshwater area that they spawned from initially.