A variation of the lobster, the spiny lobster, is included as a sea creature in both New Leaf and New Horizons.

"I caught a lobster! That makes me a lobSTAR!"

In Animal Crossing: New Leaf, the lobster is used in the Tom Yum Goong recipe during the Harvest Festival.

"I got a lobster! More like a sobster now!"

As with all sea creatures in Animal Crossing: New Horizons, the lobster was added in the 1.3.0 Free Summer Update (Wave 1).

"I got a lobster! Lobjective complete."

Like all bugs, fish, and sea creatures in the Animal Crossing series, the Lobster can be donated to the museum by talking to Blathers, the curator. Upon donating, he will tell the player a bit of information about the Lobster.

Upon donating to the museum in Animal Crossing: City Folk, Blathers will say;

"Lobsters rather remind me of shrimp, though many call them crawfish of the sea. Size varies by species, but some lobsters have been known to grow to a massive 120 centimeters (48 inches) in length. ...I rather dislike them, actually. Their clicky legs and vile bellies call insects to mind, I'm afraid."

The Lobster can be found in the back tank, crawling on the bottom.

After being donated, it can be found in the large pool in the first room of the sea exhibit. The exhibit has this to say about the lobster:

"Lobsters live in the ocean, have large, powerful claws, and are closely related to crawfish. They are a delicacy, also known by the names "crawfish of the sea" or "homard," their French name. However, unlike crawfish, they are much bigger and can live for more than a hundred years. Lobsters are aggressive and will pinch with their claws if you don't properly bind them while handling."

"The lobster is rather famous for its two large claws. But did you know that, in fact, it has six claws total? Of course, the four tiny claws aren't as threatening as its large "crusher claw" is. That pincer can put a hundred pounds of pressure on in a pinch! Just a little something to bear in mind when a lobster tries to shake your hand."

Once donated, the lobster can be found in the coral reef tank, alongside the gigas giant clam and the mantis shrimp.

During a Fishing Tourney, when given a lobster, Chip will say the following dialogue.

"Lobster is tasty any way you fix it. Seriously. Dip it in peanut butter--WOW! Nyuuuk nyuk nyuk nyuk!"

Although Chip will not score the sea creature, he will say the following:

"As for lobsters, you can boil 'em, grill 'em, or steam 'em. It all works perfectly fine. Lobster is lobster! Course, I usually just swallow 'em whole, as you'd expect! YUM!" 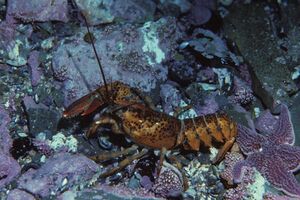 Lobsters are invertebrates and can be found all over the world. They have an exoskeleton which protects them from predators, which they molt in order to grow, making them incredibly vulnerable at this point of time. They live in rocky areas under the sea, which also helps them to protect themselves from predators. Lobsters come in different forms, clawless and clawed but they all have ten legs (the claws on clawed lobsters are adapted to be legs). Lobsters can be known to live up to one hundred years.