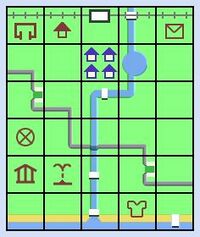 The river on a town map in Animal Crossing

A river is a body of water in the Animal Crossing series that begins on one side of the town or island and empties into the sea at the other side. Some towns and islands have a river that splits in two, creating an islet. A bridge can be used to cross rivers easily, and in Animal Crossing: New Horizons, the vaulting pole can be used to cross rivers before the player receives access to construct bridges. Some species of fish can be caught in the river with a fishing rod.

The river mouth is the area where the river meets the sea. Some fish can be caught only in this particular spot. In some towns, there may be two or more of these, increasing the chances of catching these fish.

An islet, or river island, is a rare geographical feature consisting of a small island in the middle of a river. Islets have bridges connecting them to each riverbank. The islet's length differs in each game. In Animal Crossing, they are tiny and are not displayed on the town's map. There is also the possibility of two of them being right next to each other. Bridges connecting them to the mainland can be either north–south or northwest–southeast.

This article needs to be rewritten.
Please help improve this article if you can. Relevant discussion may be found on the talk page.
Retrieved from "https://nookipedia.com/w/index.php?title=River&oldid=1068464"
Categories:
Hidden categories: