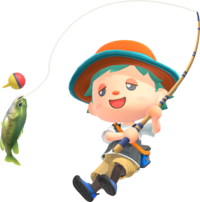 Artwork of a player with a fishing rod from Animal Crossing: New Horizons

A fishing rod is a tool used to catch fish, which can be found in the sea, ponds, and the river running through town. Catching and donating fish is required to complete the museum's collection. All fish that are caught with a fishing rod are recorded in the player's encyclopedia.

A fishing rod is the only tool that can be used for fishing. Fish can be found as dark fish-shaped silhouettes seen swimming underneath the surface of water and vary in availability between the river, waterfalls, ponds and the sea. Fishing rods can only be used near water; pressing the A Button will cast a line into the water. When a fish spots a nearby lure, they will approach it and gently nibble at it. When the fish bites the line they will create a splash, and the line must quickly be reeled in by pressing the A Button before the fish swims away and disappears. Fish can be scared away by reeling in the line too soon, running, knocking balls or snowballs into the water, or using other tools near the fish. A fish can nibble the line a maximum of four times before biting on the fifth, though many fish will bite sooner.

More advanced versions of the fishing rod that have unique effects can be obtained. The Silver Rod and Golden Rod have increasingly attractive lures and increase the time in which the line can be reeled in.

In New Horizons, villagers can be seen carrying and using fishing rods (however, they are never seen catching anything). Gifting a fishing rod to a villager will replace the Fishing Rod item as their default fishing rod.

Fishing rods in New Horizons will break after a specific amount of uses. Making a successful catch with a fishing rod, whether that is fish, trash, or a Water Egg, will reduce its durability. A fishing rod's durability is not reduced when casting the rod or failing to catch anything. 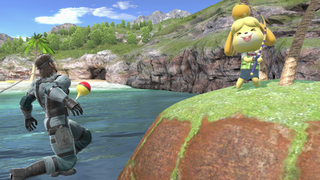 The fishing rod appears in Super Smash Bros. Ultimate as Isabelle's side special move, acting as a high range command grab to pull far way enemies towards you. When activated, Isabelle casts the bobber out a little ways away from her. The bobber pulls foes in if it hits them, then allowing Isabelle to throw them in any of the four directions by holding that direction. If she misses, however, the bobber will sit there until Isabelle presses B again to reel it back in. However, the bobber can still grab on the way back, effectively setting a trap for less knowledgeable opponents. It can also be used to help her recover, being used as a tether recovery.

Fishing rod on other wikis