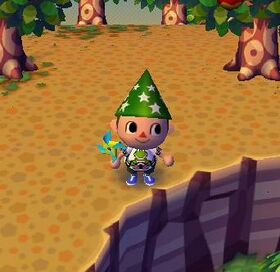 A player with a pinwheel in City Folk.

Pinwheels are a type of handheld item in Animal Crossing, Doubutsu no Mori e+, City Folk, New Leaf, and New Horizons. It will spin as the player moves, and they can also blow on it to make it spin faster.

In Animal Crossing, pinwheels can be obtained from Redd during the Fireworks Festival or from a Grab Bag on Sale Day. In Doubutsu no Mori e+, they can also be purchased from Tom Nook's store during a One Day Sale. Pinwheels come in eight different colors and sizes. They can be ordered from the catalog for various prices.

In City Folk, Pinwheels can be obtained from Phineas for free when he is present in the City. Pinwheels come in 8 different (random) colors: Green, Cyan, Blue, Indigo, Pink, Red, Orange and Yellow. If the player holding a pinwheel runs into a tree, the pinwheel may break.

In New Leaf, pinwheels can be obtained from players within the Happy Home Showcase, by visiting them via StreetPass four times. They randomly come in the same colors as in City Folk.

In New Horizons, there is only one Pinwheel. It can be obtained from Redd at his raffle for

500 Bells during the Fireworks Show, or purchased from Nook's Cranny for

800 Bells outside of August. It can be sold for