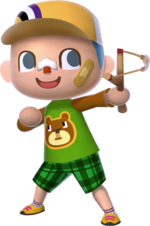 Artwork of a player with a slingshot from Animal Crossing: New Leaf

The slingshot is a tool introduced in Animal Crossing: Wild World and appearing in all subsequent games. It is primarily used to knock presents down from balloons, as well as other objects moving through the sky.

Using a slingshot will fire a pellet directly above the player. The pellet will pop any balloons floating overhead, knock Pete the postman out of the sky, and cause Gulliver's UFO to crash land in town. In New Leaf and New Horizons, it's possible to pop the balloons carrying presents using another tool as they ascend or descend over the cliff on the edge of town (the former) or if the player is standing on a high enough cliff and is within range of the balloon (the latter). In New Horizons, the slingshot has a more noticeably forward-tilted shooting angle, so the player does not need to be directly underneath the balloon. Additionally, unlike in previous games, the Slingshot in New Horizons will break after a number of uses, though one can be crafted with five pieces of hardwood.