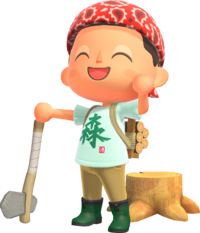 Artwork of a player with an axe from Animal Crossing: New Horizons

An axe is a tool that chops down trees to remove them. In Doubutsu no Mori, only one axe is available and it is unbreakable. However, in all subsequent games, standard axes have a limited number of uses and will degrade with every use before shattering.

An axe can be swung at trees, which will fall after three strikes. Striking this tree can cause any object on the tree to fall, including fruit and beehives. Cutting down a tree results in a stump which must be dug out using a shovel. Swinging an axe when there are no surrounding obstacles results in the player swinging and missing. Attempting to strike a villager with an axe will result in the axe either missing or simply bouncing off of them. Axes used in any game after Doubutsu no Mori have a limited number of uses before shattering, requiring them to be replaced. As an axe degrades, its inventory icon becomes more visibly distressed with a crack appearing to become increasingly larger. Axes can also be used as a substitute for the shovel to hit rocks to find insects, Bells and ore. This will also quickly degrade the axe, however.

More advanced variations of the axe are available; a silver axe is more durable, and the golden axe is quicker to use and unbreakable. In New Leaf, the rental axe available from Lloid on Tortimer Island is also unbreakable, despite appearing otherwise identical to a standard axe. Finally, in New Leaf, the silver axe and golden axe can create special designs on the stumps left behind after felling a tree.

In New Horizons, every type of axe is breakable, even the golden axe. In addition, only the axe made from iron nuggets and the golden axe can break trees by chopping them, and the flimsy axe and stone axe can only cut trees to retrieve wood.

In Doubutsu no Mori, the axe is unbreakable and does not appear in the catalog. In Animal Crossing and Doubutsu no Mori e+, the axe has 8 stages of durability degradation which change by hitting objects with the Axe. At stage 3, the Axe appears slightly damaged and at stage 6, the Axe appears very cracked. After stage 8, the axe breaks apart and disappears followed by the player expressing sadness and saying "Awww... My axe broke...". Each stage lasts for either 9 consecutive hits of a tree or 3 consecutive hits of other objects, such as cliffs, buildings, or balls. Hits on objects that are not trees do not carry over damage to the next stage, so if a tree is hit 8 times, the durability will shift to the beginning of the next stage and be equal whether the player hits a tree or another object. Only the axe's current durability stage is saved in the save file, so saving and quitting will reset the axe to the beginning of its current stage. In total, the Axe lasts for 72 consecutive hits on a tree and 24 consecutive hits on other objects. Trees take 3 hits to chop down, so a maximum of 24 trees can be chopped down with a single Axe during a single play session.

From Wild World onwards, the reward for having a perfect town is changed to the golden can. The golden axe is now obtained through other means.

City Folk introduces the silver axe, which is unbreakable. The golden axe continues to be unbreakable but will now also swing much quicker than the other axes.

New Leaf changes the effects of the silver axe and golden axe, which can now produce unique designs on tree stumps. The silver axe is no longer unbreakable and will shatter after many more uses than a standard axe.

Axes in New Horizons will break after a specific amount of uses. Hitting trees and rocks and breaking rocks all reduce an axe's durability. An axe's durability is not reduced when swinging the axe without making contact with anything, hitting other players or characters, or hitting objects that are not rocks.

Unlike most other tools, axes will not break for certain actions even when they are no longer durable, to prevent the breakage from interfering with the action. Such actions include destroying a rock or hitting a rock that dispenses an item; the axe will remain usable until a short moment after such actions have stopped. Additionally, unlike other iron tools, axes of any kind cannot be customized, and consequently cannot have their durability reset; this is reflected in the fact that the upgraded Nook's Cranny does not sell any novelty variations of the standard axe, only the flimsy and iron ones.

Axes cannot be used on any players' islands unless they are marked as a Best Friend.