Trees are common flora in the Animal Crossing series, grown by burying saplings, fruit, or Bells. Some types of trees can bear fruit, while others are just used for decoration. Depending on the season and the time of day, certain insects may be found resting against the trunk of a tree or hiding inside the treetop.

The quantity of trees planted in a town will affect its environment rating, and as such they are used to determine perfect town status. With the exception of perfect fruit trees in Animal Crossing: New Leaf, fully grown trees do not die until they are chopped down by the player, leaving behind a stump. A stump needs to be dug up to fully remove the tree, and otherwise mostly serves as decoration. Villagers will also sometimes sit on the stump.

In Animal Crossing: New Horizons, chopping trees serves as a way to gather different types of wood, which can be used as crafting supplies. Another feature introduced in this game is the ability to dig up trees with the use of energy points. Digging up a tree places it in the player's pockets, allowing it to be moved around and planted in another spot instead of having to chop it down and plant a new sapling.

Cedar trees are evergreen trees. During December, particularly around Toy Day, and during the Bright Nights in Wild World, Cedar trees are decorated with bright lights. Cedar trees will only grow in the top two acres of the village, reflecting the fact that their real-life counterparts are found more frequently in the northern hemisphere, being adapted to colder temperatures. In New Horizons however, cedar trees will grow on any acre on every platform, and regardless of which hemisphere is chosen, cedar trees will be decorated with lights from December 15 to January 6, of which shaking will produce an ornament for DIY projects.

Hardwood trees are generic trees, resembling fruit trees but bear nothing. Their appearance differs seasonally, turning golden brown in the fall, being snow-laden in the winter, and bearing cherry blossoms during the Cherry Blossom Festival in April. In New Horizons, they will bear Leaf Eggs during the Bunny Day season.

Bamboo tree debuted in Animal Crossing: New Leaf, where the bamboo shoots could be purchased in the Garden Shop. Fully grown bamboo stalks can spread on their own. In Animal Crossing: New Horizons, Bamboo Trees are a source of crafting materials. During spring, they will produce Young Spring Bamboo that is used in seasonal recipes. Bamboo Shoots can be found on the Mystery Island Tour or received from Daisy Mae.

While all trees may be shaken by the player, only cedar and non fruit-bearing trees have a chance of containing hidden items. Each day a certain amount of 100 Bell bags, beehives (or wasp nests), and furniture leaves will be scattered among the town's trees. This number varies according to the total number of trees in the town as well as the iteration of Animal Crossing being played. The table below lists the item maximums according to game title.

Shaking trees may give more than 100 Bells, depending on the player's luck for that day.

In New Horizons, the following items are obtained from either shaking or chopping a tree. 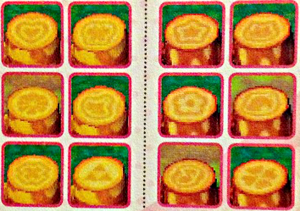 There are twelve stump designs in New Leaf. Six of these are exclusive to cedar trees, while the remainder are exclusive to fruit, bell and oak trees. Special stump designs are created by delivering the final blow to a tree with any axe. A silver axe guarantees a special design, while a gold axe produces one only occasionally. A regular axe hardly ever produces one. Because only the final blow (of three) is the one that determines whether the stump will feature a special design, the first two swings can be made using a regular or gold axe to reduce wear on a silver axe.