"Fool me once, shame on you. Fool me twice, stop foolin' me."
— Redd, Animal Crossing: Happy Home Designer and Welcome amiibo

Redd, also known as Crazy Redd or Jolly Redd, is a fox shopkeeper in the Animal Crossing series. His shop—Crazy Redd's in Animal Crossing, Wild World, and City Folk; Redd's Gallery in New Leaf; and Jolly Redd's Treasure Trawler in New Horizons—visits the player's town or island occasionally and sells artwork and, prior to New Leaf, unique furniture. However, he can also sell standard furniture at twice the standard cost and, beginning in Wild World, counterfeit artwork. It is suggested through Redd's dialog that his shop is illicit.

Redd is an orange-yellow fox with brown eyes and a brown nose. The insides of his ears are pink and his abdomen and the tips of his ears, paws, and tail are white. At his shop, he wears a blue apron with a ginkgo leaf on it; in Animal Crossing, there is instead a B. His Japanese name, つねきち (tsu ne ki chi) comes from "Kitsune", which is what his design is based off of.

Redd is characterized as deceitful, selling counterfeit artwork or overpriced furniture and telling the player that he is giving them a great deal, referring to it as a "cousin's discount," as he refers to the player as his "cousin." He is also scornful when the player refuses to buy an item or attempts to purchase one without enough Bells. His deceitful personality is likely derived from the kitsune in Japanese folklore, which are intelligent foxes who are known for tricking others.

It is revealed in one of the passwords for Crazy Redd's in Animal Crossing: Wild World that Redd is 35 years old.

In Animal Crossing: Happy Home Designer, it is implied that Redd has worked with Tom Nook in the past, as Tom Nook may mention that he worked with a fox once, but no longer does after an incident that he refuses to elaborate on.

Redd refers to Tom Nook as the "raccoon" and makes several disparaging comments about him.

Artwork of Redd from Animal Crossing.

In Animal Crossing, Crazy Redd runs his shop, Crazy Redd's Furniture Emporium, which is inside a tent labeled as the Black Market, with Black being crossed out. Before he arrives in town, Redd sends the player a letter telling them the date on which he will set up his tent. The tent will appear at 6 P.M. and stay until the next day ay 6 P.M. Copper will tell the player which acre Redd is located in. He also sets up his tent on Sale Day, and he operates a stall during the Fireworks Festival where he sells either Balloons, Pinwheels or Fans.

Once the player becomes a member of his 'family,' Redd will send them a weekly letter, received on the day before he arrives, with a new password.

Redd once again sells (sometimes exclusive) furniture and paintings, but paintings may be fake, which is only revealed when the player tries to donate one to the museum or sell one to Tom Nook. Redd's prices are twice as much as Tom Nook's in this game.

Redd appears to be in cahoots with Lyle the Insurance salesman - they work together to try and scam as much money out of players as possible. After the player speaks to Lyle about Redd, Redd somehow knows the day of the week when he should come to the town, which matches with the day the player selected when talking to Lyle.

In this game, his apron has a Ginkgo tree's leaf instead of a B.

In City Folk, Redd owns a small shop on the left of the city, in what villagers call a 'dark alley'. A villager may ask the player if they wish to become a member of Redd's store. If they accept, the villager will mail the player an invitation, which will arrive in their mailbox the next day. After this is obtained, players can enter Crazy Redd's. A membership fee of 3,000 Bells is required before purchasing any items. This event occurs only after the player unsuccessfully attempts to enter Crazy Redd's in the city.

Players will also receive one invitation after each purchase at Redd's store. This can then be sent to other players who can redeem it for access. In return, Redd will give the sender 1,000 Bells.

Redd appears to have no connection with Lyle, who now runs the Happy Room Academy HQ in the city. Therefore, insurance does not exist and any forgeries cannot be refunded at all. To tell whether a painting is fake or not, the player should talk to the villagers. If one of them complains about buying a forged painting from Redd, that means that the painting currently on display is a forgery.

In New Leaf, Redd visits the town on one random day of the week, setting up his tent in the plaza. Unlike the previous games, Redd no longer requires the player to do anything to enter his tent, and his wares are limited to art. Within his tent, Redd sets up four works of art on display. If purchased, the item will arrive by mail the next morning. Each player can only purchase one work of art, and once that work of art is selected, the player cannot change that selection. Like before, Redd's items often include forgeries, although at least one item is guaranteed to be genuine. Attempting to sell a forgery will result in the shopkeeper identifying the work of art as fake; Timmy and Tommy will buy it for a very low price, Re-Tail will charge the player a disposal fee to get rid of it. The forgery can also be disposed of by using a household or public works project trash can.

Unlike previous games, however, identifying forgeries is made much easier. While the player is browsing the items in the tent, camera controls are enabled to allow the player to examine the artworks more closely. While certain works of art are always genuine, forgeries have noticeable differences from their real counterparts. For example, the Gallant Sculpture, based on Michelangelo's David, has a cloth on his left shoulder, while the fake Gallant Sculpture has the same cloth on both shoulders.

Redd is also the vendor during the Fireworks Show in August. He operates a raffle booth in the town plaza, offering villagers a chance to win a prize with the purchase of each fortune cookie at 500 Bells apiece. If given a winning ticket, Redd will hand over a prize based on their ticket.

Redd returns in Animal Crossing: New Horizons under the professional name "Jolly Redd," being added alongside an art gallery to the museum in the 1.2.0 April Free Update. After the player donates 60 items to the museum, he will start to occasionally dock a small black market boat called the Treasure Trawler in the small "secret" beach on the northern coast of the island. Similar to his other appearances, Redd sells art pieces of potentially dubious provenance along with other items.

During Jolly Redd's first appearance, although the Treasure Trawler is docked at the player's small northern beach, it is closed; instead, he'll be wandering around the player's island. When talked to, he will introduce himself and will give the player a painting, first attempting to charge 498,000 Bells for it before cutting it down to just 1% of its original price. This first painting is always genuine, and when it is shown to Blathers, he will accept the donation and be able to expand the museum to include an art exhibit, which will cause the museum to be closed for construction the following day. On the second visit, he'll stand in the plaza and, when talked to, will mention getting a lot of interest and feeling like he loves the island. He will then return to his boat. In all future visits, Redd will remain inside the Treasure Trawler, selling four artworks for the same 4,980-Bell price point as the initial discounted piece as well as two furniture items (from the same item pool as Nook's Cranny). Isabelle or Tom Nook (if Resident Services has not been upgraded) will announce his presence when he first arrives, referring to him as a suspicious character who sells artwork. Starting in the 1.4.0 Summer Update Wave 2, Redd hosts Redd's Raffle during Fireworks Shows each Sunday in August, allowing the player to purchase various handheld items at random for 500 Bells each.

Redd appears as a visitor in the Board Game mode of Animal Crossing: amiibo Festival. If a player lands on a special-event space while he is visiting, they visit Crazy Redd's Card Shop, where they can purchase one of four cards for 100 Bells. Redd also appears during the Fireworks Show, selling Happy Fox Fortunes to the players.

Redd appears in Animal Crossing: Pocket Camp as the host of the gardening event Redd's Summer Festival. For this event, Redd requests for the player to plant flowers in their garden to attract flickerflies, which can be exchanged for various festival-themed items. Redd can also visit the campsite directly by crafting Redd's Mask Stand for 350 Leaf Tickets.

Redd in Gekijōban Doubutsu no Mori.

Redd appears in 🎬 Gekijōban Doubutsu no Mori, where he almost tricks Yū and Alfonso into buying a fake golden slingshot during the Fireworks Show. Redd insists that the golden slingshot is one of a kind, when, in reality, he has an entire box filled with them in his tent.

Redd appears as a trophy and a sticker in Super Smash Bros. Brawl, and he is a spectator in the Smashville stage.

Redd can both be seen as a trophy, and as a spectator in Smashville. However, while the trophy in both of the versions has the same design and description, a challenge is required to unlock it in the Nintendo 3DS version.

Redd appears as a spirit in Super Smash Bros. Ultimate. 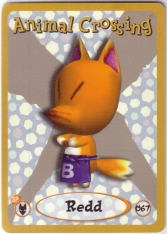 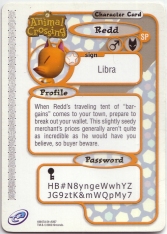 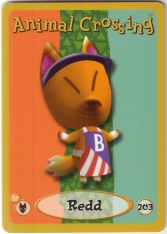 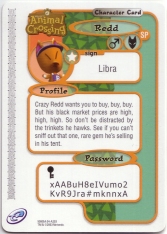 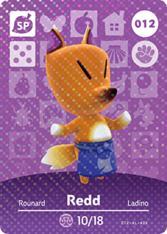 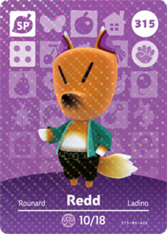