Gender and characterization in Japan[edit]

Gracie is female in international versions of the games, but in Japanese (and later Korean) versions Gracie is male. Unlike Saharah or Blanca, this change is intentional, since Gracie is depicted as an okama, a slang Japanese term (sometimes derogatory, but also a reclaimed identity term similar to queer in English) referring to effeminate homosexuals, men who cross-dress, or sometimes transgender women. The localizers of Animal Crossing considered this a cultural difference that would not be understood or well-received in America.[1] This is the reason Gracie has a male voice in all first-generation games, even Animal Crossing. In Japan, the reason "Grace" (グレース, Gurēsu?) is interested in fashion is intended to be that she is an okama, i.e. a cross-dresser and/or transgender woman, while in international versions it is simply because she is snooty and glamorous.

Gracie's characterization as an okama in Japan vs that of a simply haughty fashionista in the west is also reflected in her name and rumors surrounding her real name: in Japan the name "Grace" is implied to either be a drag persona or the name taken on when transitioning, while internationally "Gracie" is the name she took to sound better as a fashion designer, similiar to Labelle. In multiple games in the series in Japanese, there are rumors that Gracie's real name is なべのすけ (Nabe-no-suke), from onabe, the slang counterpart to okama roughly meaning "butch" or also a transgender man, and the suffix suke.[nb 5] This appears and was changed in the following instances:

After the player has upgraded Timmy and Tommy's store to T.I.Y., Gracie will start appearing at the event plaza on random week days after the player has spent 70,000 Bells. When she appears, she will mention that she is looking for a town where she can open her shop, GracieGrace, but has yet to decide which town she deems worthy enough for her image. Thus, in order to decide, she asks the player to partake in her fashion check.

If the player manages to pass her fashion check four times, and if other various requirements are met, T.I.Y. will upgrade to the T&T Emporium, and Gracie will open her own personal store, GracieGrace, on the third floor.

Gracie was added in the 2.0 update of Animal Crossing: New Horizons, where she can be invited to The Roost via scanning her amiibo. Additionally, Gracie's poster can be obtained from Nook Shopping after inviting her to Photopia via her amiibo. 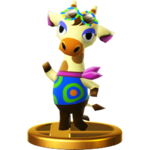 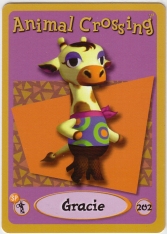 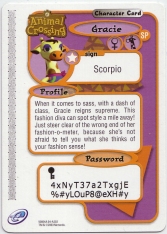 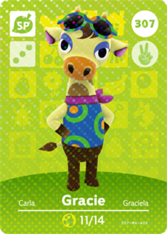