In the Animal Crossing series, there are several unseen magazines and other publications, usually read and mentioned by villagers.

"...if someone broke in and stole my collection of Captain Paperweight comics..."
— Lazy villagers, Animal Crossing: City Folk 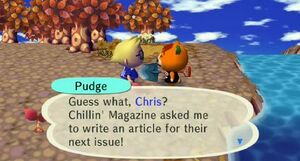 Pudge talking to a player about Chillin' Magazine

Crazed Fan and Fork Bender Magazine are magazines mentioned by peppy villagers in the town. Among other things, they recommend weekly "lucky items," such as carpets.

Chic Monthly is a magazine mentioned by snooty villagers. Sometimes, animals will ask the player for an item saying that it's currently trendy as said by the magazine. Villagers will also mention it when in the player's house, talking about the magazine's coverage on televisions and interior decorating, and complementing the player's TV in the process. The 2nd word in the magazine's name differs between species, for example "Chic Kangaroo Monthly" will be said by kangaroo villagers, and "Chic Duck Monthly" would be said by duck villagers. It is only known to be mentioned in Animal Crossing: New Leaf as an apparent replacement for Ms. Nintendique.

Business Strategies for Dolts is a periodical occasionally brought up by villagers in Animal Crossing: New Leaf. It is presumably based off the real world "For Dummies" book series. In Animal Crossing: Pocket Camp, villagers may mention this book if a lost book is found for them.

Hobby Life is a magazine read by normal villagers and mentioned in Animal Crossing: New Horizons. Such villagers may mention thinking they remembered the player from the cover of an issue, with a feature article about the player's interest in a random hobby.

Ms. Nintendique is a magazine mentioned by snooty and peppy villagers in the town. It parodies real magazines that focus on beauty and self-help. The name of this magazine is a portmanteau of Nintendo and Montique. Snooty villagers make references to it, such as mentioning beauty tips and products. Some of the beauty tips involve bathing in a certain food, such as apple cider. On occasion, a snooty villager will show doubts about these tips, and mention she dislikes trying the same tip last year with a different food. The publication also states that certain villagers make good couples.

A discussion about the magazine between two peppy villagers may result in one animal mentioning the High Heels Special of said magazine, and then asking the other if she still has martial arts classes. The other animal will then use the "Rage" emotion, because she thinks the animal who asked is calling her a wimp. The angry animal will then realize what she meant by commenting, "Oh yeah... You could do some real damage wearing them..." Every once and a while, a villager who reads Ms. Nintendique will tell you she had taken a quiz from the magazine and then made her own quiz, wanting the player to take it. Some villagers will also say that they have purchased a certain item from "Ms. Nintendique" and have accidentally bought two of the same item, meaning that they will give the player the second item.

Two copies of "Ms. Nintendique" are next to the cash register in Shampoodle.

Nerds and Wyverns Weekly is a magazine catering to nerds in the Animal Crossing universe. First mentioned in Animal Crossing: City Folk, it is a parody of magazines such as Dungeon and Dragon, which cater to players of the stereotypically nerdy role-playing game Dungeons & Dragons.

Among other things, Nerds features home decor, such as carpeting, that is considered "nerdy". When peppy villagers see an item they own featured in the magazine, they quickly get rid of it, presumably to avoid looking nerdy. 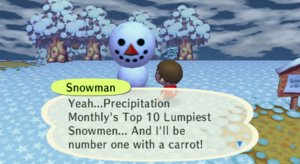 Precipitation Monthly is an unseen magazine read by the Snowmen that are built by the player during winter. The magazine publishes multiple top 10 lists, such as the top 10 most eligible snowbachelors, and the top 10 lumpiest snowmen. It is implied that these lists are highly regarded among snowmen, as when referring to one, a snowman will call it "the list."

Staplers: A Brief History is a book villagers may mention, asking if the player has read it.

In Animal Crossing: New Horizons, there are a number of other unseen books that may be mentioned randomly in dialogue (usually by normal villagers), though in most cases they are not described further. Titles include Turnip Your Enthusiasm; Yes, Yes to Success; and A History of Resident Services.[1]