This article is about the personality. For the anteater villager, see Snooty (villager).

"She's very calm and grown up. I'm not the only person in town who looks up to her!"
— Isabelle, talking about a snooty villager, Animal Crossing: New Leaf

Snooty[1][2] is a female villager personality type in the Animal Crossing series. Snooty villagers are portrayed as self-centered and arrogant, and in earlier games they are dismissive toward the player.

As of the release of Animal Crossing: New Horizons, there are a total of 67 snooty villagers across the series;[nb 1] 57 appear in New Horizons. 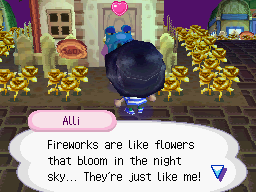 Alli, a notable snooty villager, arrogantly compares herself to fireworks.

Snooty villagers are well-spoken and polite, but sometimes appear self-centered and arrogant towards other villagers, including the player. In Animal Crossing: New Leaf, they speak with a lower-pitched and sophisticated, almost charming voice, which sounds similar to the voices used by smug villagers. Animal Crossing: New Horizons gives them a soft and sophisticated voice similar to the normal villagers, but at a lower pitch. If the player talks to them often, they open up and become more talkative, and will sometimes give the player lessons in fashion. However, this doesn't prevent them from making the occasional scathing comment. Snooty villagers usually have upper-class names, or names relating to high-value items and gemstones, making them easy to distinguish when talking to villagers around the town. In Animal Crossing: New Leaf, the arrogant nature of snooty villagers is toned down.

Like peppy villagers, they read "Ms. Nintendique" frequently, coming out with quotations from the magazine such as what their lucky item of the day is, or saying that they bought so much blush that the magazine gave them a shirt, and then they say, "Here, you can have it!" and give it to the player. They will often talk about Gracie and how much they love her clothing.

In Animal Crossing: Happy Home Designer, snooty villagers turn into stereotypical, yet still self-centered housewives. As such, their main interests lean toward housecleaning, cooking (especially cakes) and gossip rather than fashion. While more amiable and polite than usual, snooty villagers still put themselves in high regards; thus, it is not rare to see them comparing their lifestyle with other, unknown neighbors – while still lingering in the thought of having someone who shares their refined tastes. In their spare time, they like reading magazines and play games like sudoku. However, snooty villagers still maintain a sort of reckless and materialistic day-to-day approach to life, which is almost crystal-clear while they go shopping: they can't resist the urge of buying things, and carelessly let their problems slide on the shoulders of their future-selves.

Olivia, a notable snooty villager, argues with Biskit, a lazy villager; snooty and lazy villagers often conflict with one another.

Below are some (not all) quotes made by snooty villagers.

Below is relevant only to Animal Crossing: Wild World.

Snooty villagers will ask the player the following question to trigger their portrait-giving sequence:

"This may sound sudden to but... You do have siblings right?"

By choosing "I don't know", and after a tirade about being mysterious, she will reply by saying:

"What would you say if I gave this to you? This is very rare."

The player can respond by saying this:

All snooty villagers will say that at one point (if talked to enough).