Animal Crossing: New Leaf - Welcome amiibo[nb 1] is an updated version of the Nintendo 3DS title Animal Crossing: New Leaf with additional content, mainly the inclusion of amiibo support. Internally, the update is referred as version 1.4 of Animal Crossing: New Leaf. This is the first major update released for the game, arriving four years after the game's initial launch in 2012. The update was released worldwide on November 2, 2016 via the Nintendo eShop as a free digital download for existing New Leaf players. In addition, the update is included on physical retail Game Cards released on November 23, 2016 in Japan, November 25, 2016 in Europe, and December 2, 2016 in North America. The Japanese and European releases include one free amiibo card with every copy.

The update was first announced on Nintendo's official Japanese website on July 2, 2016.[1] It was later reaffirmed and announced for Western release via the September 1, 2016 Nintendo Direct.[2]

On November 2, Nintendo released an official trailer[3] and revealed additional information via a Nintendo Direct focused on the update.[4] 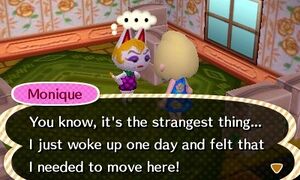 Welcome amiibo introduces amiibo compatibility to the game. Amiibo from the Animal Crossing series, as well as amiibo from several other Nintendo franchises, are compatible.

Villagers can be brought into New Leaf by summoning Wisp, who will prompt them to scan a character's amiibo to make him transform into said villager. Once summoned, the villager will set up camp in a new campground managed by a new special character, Harvey. At that point, the player can invite the villager to live in their town.

50 villagers from Animal Crossing and Doubutsu no Mori e+ who were absent in New Leaf and earlier entries also return to the series with this update. On November 11th, 2016, 50 new amiibo cards were released featuring these 50 returning villagers.

Other amiibo series are compatible, and scanning them introduces exclusive characters and items. For example, Splatoon amiibo will bring Inkwell, Cece, or Viché into the game, as well a series of Splatoon-themed furniture and clothing items. The Legend of Zelda series amiibo also work, adding Medli, Ganon, Epona, or W. Link. Monster Hunter Stories amiibo will add Felyne to the game. Six other new amiibo cards which add villagers from a crossover promotion with Sanrio were also released in Europe and Japan. However, the pack would not see an American release until March 26, 2021, when the Sanrio amiibo cards were exclusively released to Target in North America. This release, alongside restocks in Europe and Japan, coincided with New Horizons's 1.9.0 Free Update.[5][6][7]

Welcome amiibo introduces 14 new villagers, 13 of which can only be obtained from scanning their amiibo. All of the new villagers are a crossover with other video game series or real-life brands and companies. Two other crossover villagers, Felyne and Filly, make their first appearance in a mainline Animal Crossing game after debuting in Happy Home Designer. Filly and Holden, a new crossover villager, could only appear as visitors to the campground for Japanese towns and cannot move into the player's town under any circumstances.

below) initially only appeared in Doubutsu no Mori e+. Five of the returning villagers have had their personalities changed.

Players are able to place villagers into photographs they take with their console's camera.[8] The villagers available are from the player's town (including players), but amiibo cards can be used to summon specific villagers. They can be moved across the view (Circle Pad), rotated horizontally (in a small degree) and vertically (D-Pad); set smaller or bigger, farther or nearer; standing, sitting, lying, or running; showing emotions (unlocked ones) permanently until the revert button on the touch screen is pressed. The time and date or only date can be added by pressing A. Pressing X cycles through 3 lighting effects. The B button changes the borders of the image, and the Y button toggles the characters to look at the center of the screen. The 3D effect is not available.

A new campground has been built in town, and is located on the eastern or western cliffs of town (depending on town orientation) and is managed by Harvey. Every day an RV will appear in the campground, with a special character inside. A second RV will appear when a Welcome amiibo villager or a compatible amiibo figure is scanned. Unique and hard-to-obtain items can be purchased from Harvey or the campers using MEOW Coupons.

Town initiatives are daily objectives that can be completed to receive MEOW Coupons, which is the currency used in the campground. A CAT Machine has been added outside of town hall and allows the player to receive MEOW Coupons after completing initiatives. The initiatives range from simple tasks such as donating fish and planting trees, to more involved objectives such as spending a large amount of Bells on a single purchase. They can be viewed on the TPC screen of the menu, where the completion time will also be listed.

A new house expansion, a Secret Storeroom, can be purchased from Nook's Homes for 158,000 Bells. Accessed from the touch screen, it provides a vast amount of additional storage space that can hold up to 360 items. The storeroom's inventory is separate from the existing 180-capacity locker space, but can only be accessed while inside the player's house.

After purchasing the expansion, Tom Nook will introduce the player to Lottie. She will demonstrate how to arrange furniture using the touch screen, similarly to Happy Home Designer. After the tutorial is completed, the feature will be unlocked for use in the player's house, making it easier to arrange furniture and stack items.

In addition, clothes can now be displayed on the walls of a house, just as they can in Happy Home Designer.

The ability to sell the town[edit]

When opting to rebuild a town, the player can now sell the town to Tom Nook for a large amount of Bells that can be transferred to help create a new town. The player's catalog can optionally be sold for additional funds, or transferred to the new town. The funds can either be received as a lump sum, or in small daily installments with additional interest payments of 10%.

Selling a town is only possible if the town has a prestige level of 3. This can be determined by the growth stage of the Town Tree (50 days and 50 hours). Public works projects that have been requested by villagers in the old town will automatically be available to construct in the new town.

The update includes two new minigames, Animal Crossing Puzzle League and Desert Island Escape. These can be played by activating a Nintendo 3DS XL/New Nintendo 3DS XL or a Wii U piece of furniture, respectively. High scores at these games reward the player with exclusive furniture and clothing sets, as well as MEOW Coupons.