Zipper in front of the town hall in City Folk.

The Bunny Day event revolves around an Easter egg hunting competition. 30 Bunny eggs are hidden around the town, which can be opened to reveal either candy (18) or a Bunny foil (12). Zipper will exchange one Bunny foil for an item of furniture from the Egg Series. The villagers around town will not get involved in the events, but will talk about Zipper and finding mysterious eggs buried around the town. Each player character gets their own set of eggs.

In Animal Crossing: New Leaf, Zipper will ask players to find 6 kinds of eggs hidden around the town.

It has been observed that, if all rocks which contain stone eggs are not emptied by the end of the day, the rocks will turn into regular unbreakable rocks.[citation needed] However, this is uncommon. Solutions, such as time-traveling to the day after the event, opening the game, and exiting without saving, have been suggested.

In certain years where Bunny Day falls on April 1, such as 2018, Bunny Day and April Fool's Day take place on the same day. If this occurs, both Zipper and Blanca visit the player's town at the same time. 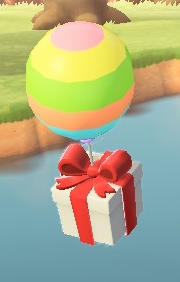 In Animal Crossing: New Horizons, the Bunny Day celebrations last for eight days (12 days prior to version 1.9.0) and end on Bunny Day itself, with Zipper appearing on the first and last days. Throughout the event, players can find eggs which can be used to craft Bunny Day Series DIY furniture and clothing.

6 types of eggs can be found around the player's island and on Mystery Island Tours:

All except the sky eggs have a higher rate on Mystery Islands.

At the start of the event, Zipper requests the player to construct all furniture items from the Bunny Day Series before giving them the recipe for the Bunny Day bed. If Zipper is first talked to after obtaining the Bunny Day Bed recipe, he will give the player a random DIY recipe they do not already have. If the player does not talk to Zipper while he is on the island and the day moves forward, he will send the DIY recipe via the mailbox.

The other furniture recipes can be found in unique Easter-themed balloons or message bottles along the beach or given to the player by villagers. Clothing DIY recipes are earned through finding a certain amount of one type of egg. In total, there are 17 furniture recipes, 22 clothing recipes, and 1 wand recipe to collect. Throughout the event, villagers will mostly talk about their excitement for Bunny Day over other topics, as well as give hints to the player about where higher dispense rates are (such as hitting rocks on Mystery Islands or harvesting wood from palm trees). In Nook's Cranny since version 1.9.0, several additional Bunny Day items are sold during the week leading up to and on Bunny Day, including the Bunny Day candy, Bunny Day garden flag, Bunny Day planter box, Bunny Day topiary, and the Bunny Day tree.

In the Board Game mode in Animal Crossing: amiibo Festival, Zipper appears and all spaces turn into egg spaces. When a space is walked over, the player receives eggs, and after they stop moving, they receive a corresponding number of Happy Points. Green spaces give 1–2 eggs, silver spaces give 4–5 eggs, and gold spaces give 10 eggs.

This article or section requires further research about Bunny Day's mechanics in New Horizons.
You can help by investigating this topic and editing this article to include more information. Relevant discussion may be found on the talk page.
Further details: Commentator notes issue regarding recipe acquirement

This article or section requires further research about Bunny Day's mechanics in New Horizons.
You can help by investigating this topic and editing this article to include more information. Relevant discussion may be found on the talk page.
Further details: Commentator notes issue regarding recipe acquirement
Retrieved from "https://nookipedia.com/w/index.php?title=Bunny_Day&oldid=1067362"
Categories:
Hidden categories: