Not to be confused with One Day Sale. 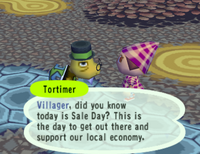 Tortimer speaking to the player on Sale Day.

In Doubutsu no Mori, Doubutsu no Mori+, Animal Crossing, and Doubutsu no Mori e+, during Sale Day, Tom Nook's store sells Grab Bags in place of non-furniture or clothing items, and Redd is guaranteed to appear in the player's town. The price of the Grab Bags sold at Tom Nook's store is equivalent to the current year,[nb 5] and they contain three items, which can be furniture, clothing, wallpaper, carpet, or a pinwheel. The former four item types have a 25% chance of appearing in a Grab Bag and can appear multiple times in the same bag,[nb 6] while a pinwheel has a 50% chance of appearing instead of one of the other items and can only appear once in a single bag.

In addition to Nook's sale, in Animal Crossing and Doubutsu no Mori e+, Tortimer appears near the wishing well and will give the player a Market Model if spoken to. He tells them that Sale Day is a day to support the local economy and that it is the beginning of the holiday season. The event of Tortimer giving the Market Model was repurposed from the Japanese holiday Spring Day.

Nook Friday was added to Animal Crossing: New Horizons in the 2.0 Free Update. From the fourth Friday in November to November 30, Nook's Cranny has a 30% off sale on everything in the shop.

Because of the overlap between Nook Friday and the Turkey Day Nook's Cranny shopping season, the Cozy Turkey Day DIY and Turkey Day Recipes packs are impossible to receive under their standard buy values.