In Animal Crossing, interacting with the wishing well allows the player to check the town's Field Rank, as well as "apologize" to remove a favor item from their pockets if the villager the item belongs to has moved away. During events, Tortimer visits the wishing well, and for some events, props such as tables are set up in the area and villagers visit. If the town retains a perfect Field Rank for 15 days, selecting "How are things" makes Farley appear to give the player the Golden Axe.[nb 1] 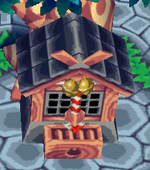 In Doubutsu no Mori and Doubutsu no Mori+, the wishing well offers the same options as in Animal Crossing but is based on a Shinto shrine rather than a wishing well, and it is known as the shrine. In these versions, villagers gather in front of the shrine on New Year's Day and take turns ringing its bells, reflecting a tradition in real-world Japanese New Year's celebrations.

In Dòngwù Sēnlín, the shrine has a slightly different design from the Nintendo 64 version, now featuring different textures and missing the wooden extrusions from the roof and the bells from the front.

In Doubutsu no Mori e+, the international wishing well design is retained and two features are added to it: the ability to access minigames if a Game Boy Advance is connected, and the ability to invite villagers to move to town via their e-Reader card.