After the player pays the 10,000 Bells to Tom Nook to purchase their house, spends at least 12,000 Bells at the store, and has lived in town for at least ten days, the Nookling Junction will close for one day and expand to T&T Mart. 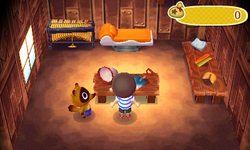 The inside of the Nookling Junction

The Nookling Junction sells seven items each day, including two furniture items, two tools, one set of stationery, one Wrapping Paper, and one Fortune Cookie. During certain events the Fortune Cookie will be replaced with event-themed items, such as Fireworks Fountains or Candy.