"You should visit my island! Just hit the airport and tell 'em you want to go to Harv's Island. That's the name of my pad. Groovy, right?"
— Harvey, Animal Crossing: New Horizons

Harvey is a brownish-beige spaniel, with his appearance resembling a hippie. He has brown hair, a black nose, a dark-brown tail, a brown crescent-shaped moustache, a red inner-mouth, half-closed eyes with brown eyelids, white scleras and large, round, black irises, and long and large brown wiggly ears with stripes (colors being yellowish-brown and brownish-yellow) and big yellow tips.

Harvey has a hippie-like personality, and his voice is similar to that of a lazy or smug villager.

In Animal Crossing: New Leaf - Welcome amiibo, Harvey is found in the campground, sitting on a tree trunk and holding a cup of coffee. He stays outside all day, and all night. When the player talks to him, the player has the following options:

In Animal Crossing: New Horizons, Harvey shows up on the player's island after the third villager moves in. He tells the player that he lives on his own island, Harv's Island, and invites them to visit anytime. Harv's Island has a free photography studio for the player to use anytime where they can decorate the rooms with their catalog furniture, invite villagers to also be in the pictures, and give them costumes. When the player invites villagers for the first time and heads back to their own island, he calls up the player to tell them that via the Nook Shopping catalog, they can order posters of any villagers they have invited to Photopia, whether the player used an amiibo card to invite the villager to the studio, or the villager lives on their island.

Beginning in the 2.0 Free Update, Harvey will work with Harriet to expand his island to have an open-air market.

In Animal Crossing: Pocket Camp, Harvey's Wood Cabin, a re-creation of his Harv's Island studio in New Horizons, was available to craft from July 14 - September 12, 2021. If the player crafts this and puts it in their campsite, Harvey will come visit.

Those who never question don't know a thing. 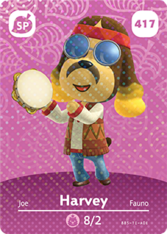