"Here at the counter, ye can sign up fer a tour of a tropical island. We also got some informational pamphlets over there, so take a peep at 'em if ye want. Or if yer feelin' lazy, just relax and take a load off! Yar har har!"
— Leilani, Animal Crossing: New Leaf

Leilani is a turtle[nb 1] in Animal Crossing: New Leaf who appears on Tortimer Island. She is the wife of Kapp'n, the daughter-in-law of Grams, and the mother of Leila.

Leilani is a green turtle/kappa with a bald spot surrounded by brown hair tied in a ponytail, a big yellow muzzle, and a red inner mouth, about the same age as her husband, Kapp'n. Unlike the rest of her family, she has small eyes, which are mostly opened, showing two small white pupils (with each eye having each one) and four short black eyelashes (with each eye having two). She wears a red flower hairpin on her ponytail, and an orange dress with white flower patterns with lightish-orange linings.

Like her family, Leilani speaks with a stereotypical pirate-like accent. 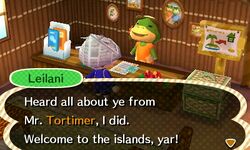 In Animal Crossing: New Leaf, Leilani appears on Tortimer Island at the reception desk and allows the player to go on tours or return to their town. In the Welcome amiibo update, Leilani's Pic can be obtained from Wisp if her amiibo is scanned.

Although initially absent, Leilani was added to Animal Crossing: New Horizons in the 2.0 update, appearing at the Roost if she or any member of Kapp'n's family is invited via the amiibo phone. Additionally, Leilani's poster can be obtained from Nook Shopping after inviting her to Photopia via her amiibo.

In Super Smash Bros. for Nintendo 3DS, Leilani appears as a trophy and has a chance of appearing in the background of the Tortimer Island stage.

In Animal Crossing: Happy Home Designer, Leilani will share a house with Kapp'n, Leila, and Grams.

The captain's wife steers the ship.

The captain's wife steers the ship. 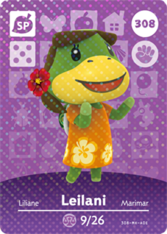