"Bring me all the fish you can! Nyuk nyuk nyuk! Oh! I should let you know, fish you give me are NOT returned! Nope! Keep that in mind, OK?"
— Chip, Animal Crossing: New Leaf

Chip is a beaver who hosts the Fishing Tourneys in games prior to Animal Crossing: New Horizons, where his role is replaced by his son, C.J.. His name might come from the dish fish 'n' chips. Chip sets up tent early in the mornings (at 6:00 AM sharp, but he will not accept submissions until 9:00 AM in City Folk and New Leaf) and waits for players and villagers to bring him different types of fish to measure at the weigh-in station.

Chip is a grayish-brown beaver with large black eyebrows, baggy eyes with white scleras and blue pupils, blue inner-ears, freckles, a slightly big black nose with a little bit big white spot, and large buckteeth. His muzzle and belly are white, while his hands, feet and tail are blackish-gray.

Chip loves hosting Fishing Tourneys. If an eligible fish is brought, he will measure it by chewing it up inch by inch. Every time a fish is brought in that breaks the current tourney record for the day, he will give an item for a prize. If players hold the biggest fish record by 6 PM, he will send an additional reward in the mail. He will always post the winner of each tourney to the bulletin board. Although beavers are herbivores, Chip is shown eating the fish. He does not eat special fish, such as the Stringfish, but still accepts them as entries.

Chip makes his first appearance in Doubutsu no Mori and Animal Crossing as the host of the Fishing Tourney. In this game, Chip sets up his tent near the mouth of the river, where many other villagers are shown to be fishing. He only accepts types of bass, specifically Small Bass, Bass, and Large Bass, and will not accept any other kind of fish. If the player gives him a Sea Bass, Chip will comment on the fact that it is a "bass," but not the kind he is looking for. Fishing Tourneys occur one Saturday a month in all months except June, July, August, and September.

In Doubutsu no Mori e+, Chip will give the player a free Fishing Rod if they do not have one in their pockets.

After being absent in Animal Crossing: Wild World, Chip returns in Animal Crossing: City Folk, once again as the host of the fishing tourney. In this game, Chip now sets his stand at the town hall, instead of the river mouth, and now accepts any kind of fish given to him. However, he will still give the player a specific category of fish to find for him, such as freshwater or saltwater fish. If the player manages to catch every type of fish, he will give the player a golden fishing rod. Chip's voice is notably deeper in this game compared to Animal Crossing, and sounds more similar to a cranky villager.

Chip once again appears in Animal Crossing: New Leaf, and now hands out furniture from the Fish Set when a large-record fish is given to him by the player. Furthermore, he no longer sets his stand in front of the town hall, but instead in the event plaza. Chip hosts the awards ceremony between 6 PM and 9 PM, handing out gold, silver and bronze trophies to the winners. Just as in City Folk, Chip will give the player a golden fishing rod if they show to him that they have caught every type of fish.

With the release of the 2.0 update in Animal Crossing: New Horizons, Chip can appear in the Roost. When invited, he will be seated with C.J. across from him. He will also appear with Nat if the latter is invited instead. Additionally, Chip's poster can be obtained from Nook Shopping after inviting him to Photopia via his amiibo.

In Animal Crossing: Pocket Camp, Chip once again is featured as host of the fishing tourneys. However, he will only accept "tourney fish" that is used specifically for the tourney, and will also measure all of the player's fish at once, adding it to a "total size" instead of an individual measurement. If the player catches a certain measurement of fish, Chip will provide the player a prize based on how much length they achieved, including a trophy that is sent to the player after the tourney is concluded. Chip also hosts various tasks known as "Chip Challenges", and will provide more prizes once each task is completed.

As of November 2020, C.J. has taken over as the Fishing Tourney host.

Chip appears as a collectible trophy in Super Smash Bros. for Nintendo 3DS.

Beware the hunger of the patient fisher. 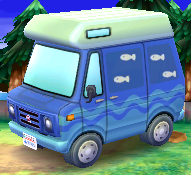 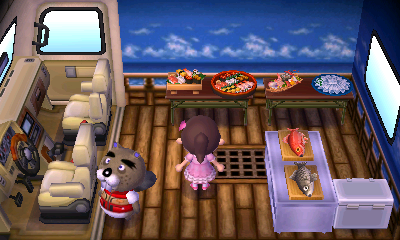 Beware the hunger of the patient fisher. 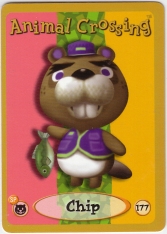 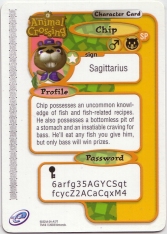 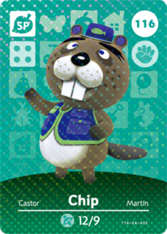