"My, isn't this a kick in the proverbial pants, eh wot? Quiet a spectacular catch you've got here! This might even garner you top honors in one of the fishing tourneys. A splendid specimen! I'll watch over brute personally. Rest easy on that account, wot wot!" 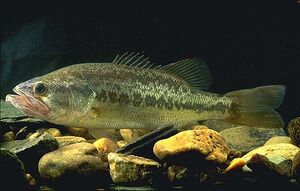 The large bass is marked by a series of dark, sometimes black, blotches forming a jagged horizontal stripe along each flank. The upper jaw (maxilla) of a largemouth bass extends beyond the rear margin of the orbit. The largemouth is the largest of the black basses, reaching a maximum recorded overall length of (29.5 in/75 cm) and a maximum recorded weight of 25 pounds, 1 ounce (11.4 kg). The fish lives 16 years on average.